PROVENA-RESURRECTION COMBINATION CREATES LARGEST SYSTEM IN ILLINOIS By John Mugford In the era of healthcare reform, much of the merger and acquisition activity taking place among hospitals and health systems involves healthy, financially strong entities purchasing smaller, perhaps struggling ones. That’s not the case with two systems in Greater Chicago area which recently announced a […]

Inpatient Projects: Columbia, S.C., to get a new hospital

PALMETTO HEALTH BREAKS GROUND ON 76-BED FACILITY ON NORTH SIDE OF CITY By Dan Emerson A ground breaking ceremony was held in late October for a future hospital to serve the growing, hospital-bed deprived area of northwest Columbia, S.C. Palmetto Health is investing nearly $100 million into the future Palmetto Baptist Parkridge Hospital, which is […] 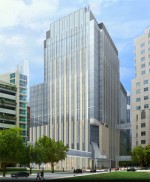 HOSPITAL UNVEILS PLANS FOR $334 MILLION, 25-STORY, 1 MILLION S.F. FACILITY By John Mugford For years, healthcare real estate developers have been noting that many medical office buildings (MOBs) have been getting larger, especially those with a variety of specialties, surgery facilities, diagnostic imaging centers, and host of other services. Well, there are large medical […]

DUKE REALTY TO DEVELOP 52,000 S.F. FACILITY FOR NORTH FULTON HOSPITAL By John Mugford It looks as if a need for Class A medical office space near the 202-bed North Fulton Hospital in Roswell, Ga., will be filled by the fall of 2012. That’s when Indianapolis-based Duke Realty Corp. (NYSE: DRE), a publicly traded real […]

NEXCORE WAS ABOUT TO START WORK WHEN HOSPITAL ASKED FOR MORE SPACE By John Mugford Anyone involved in the development of medical office buildings (MOBs) understands the need to remain flexible and ready to make changes in a project’s plans, even late in the pre-development process. Denver-based NexCore Group LP, a medical real estate developer, […]

BUT THE HEALTHCARE REIT IS STILL AN ACTIVE BUYER OF MEDICAL BUILDINGS  By John Mugford A big pipeline that Newtown-based Senior Housing Properties Trust (NYSE: SNH) has used to make large, off-market healthcare portfolio acquisitions in recent years is finally empty. According to the real estate investment trust (REIT), the recent closing of one last, […]

HEALTH SYSTEM-OFFERED PORTFOLIO INCLUDES DEVELOPMENT OPPORTUNITIES. By John Mugford Acquiring medical office building (MOB) portfolios directly from health systems can have unique perks for buyers, as the assets often include hospital tenants and their solid credit ratings. Plus, the portfolios often are composed of a large share of on-campus facilities, which many investors favor over […]

AVERAGE SALE PRICE TOPPED $200 PSF FOR THE FIRST TIME IN THREE QUARTERS By John Mugford In a rather mundane but steady quarter for medical office building (MOB) sales, at least one somewhat important milestone was reached, or re-reached. While statistics from New York-based Real Capital Analytics (RCA) Inc. show that MOB sales in the […]

GOOD REPUTATION KEEPS HEALTHAMERICA HUMMING By John Mugford When Thomas W. “Tommy” Tift III was in Los Angeles for a healthcare real estate conference and some meetings earlier this year, he took an afternoon away from business to enjoy the nice weather and squeeze in a round of golf. But the getaway quickly turned into […]

JOINT VENTURE BUYS ONE OF FIRST MEDICAL MALLS By John Mugford When it was built back in 1996, Bethesda Health City in Boynton Beach, Fla., was one of the first medical mall developments in the country. The concept for this “one-stop” healthcare facility, like those that have followed, is to provide patients with a convenient […]

NEWPORT BEACH, Calif. – There’s a new name among the companies actively involved in acquiring healthcare real estate, a sector that has seen quite a number of mergers and acquisitions among its leading companies in recent years. In this case, the independent members of the board of Grubb & Ellis Healthcare REIT II, an active […]