Feature Story: MOB sales are on a record pace

2021 medical office sales volume was the highest ever, and Q1 data suggests we could be on a pace for the sector’s first $20 billon year 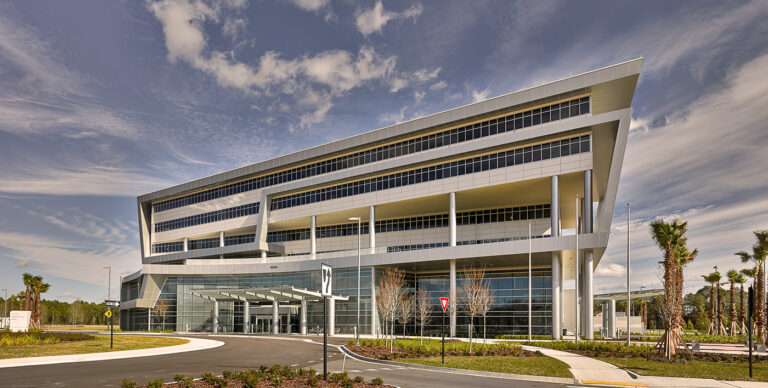 The largest building in the largest MOB portfolio sale of 2021, the $612 million Landmark MOB Portfolio, was this 211,975 square foot facility on the University of Florida (UF) Health campus in Jacksonville, Fla. Physicians Realty Trust was the buyer. (Photo courtesy of Landmark Healthcare Properties)

Prior to 2021, the high-water mark for medical office building (MOB) sales in any given year took place in 2017, when the volume was $15.5 billion, according to information provided by healthcare real estate (HRE) data firm Revista.

During the next three years, that figure was not threatened at all, with the next highest volume during that time coming in at $12.6 billion in 2018.

But then came 2021, a year in which many professionals involved in the sector say there was pent-up demand in the MOB sales sector as the country – and the world, for the matter – was doing its best to put the COVID-19 pandemic in the rearview mirror.

What happened in 2021 was quite remarkable, with the MOB sales volume shattering the all-time record and totaling $18.3 billion, or 15.3 percent higher than in 2017.

This statistic was presented April 21 during Revista’s First Quarter (Q1) Subscriber Webcast, during which time two of the firm’s principals and founders, Mike Hargrave and Hilda Martin, presented a wide variety of data concerning the MOB space.

The big increase in volume in 2021 was, as noted earlier, due to pent-up demand for acquiring the product type as the pandemic continues to wane. It was also a testament to the strength of the product type, which has proven once again to be a solid investment despite the many headwinds brought on by the pandemic and a number of obstacles facing most business sectors, such as rising prices for all types of goods, materials and labor; increasing interest rates; labor shortages; supply chain difficulties; and other challenges.

Two of the ways in which MOBs have shown their strength is in the nationwide absorption and occupancy rates. According to Revista data, Q4 2021 saw the strongest MOB leasing activity since 2018, with 6.2 million square feet “absorbed across the top 50 (metropolitan areas of the country),” according to Mr. Hargrave.

In addition, during the earliest days of the COVID-19 pandemic, when many industries were shut down and elective procedures and surgeries were put on hold in most states throughout the country, owners of MOBs widely reported that their rental collection rates remained in the high 90 percent range, solidifying the product type’s status as a strong investment during difficult times.

During another event March 2-4, the Revista Medical Real Estate Investment Forum 2022, which was held at the Loews Coronado Bay Resort, Mr. Hargrave said the record-setting sales volume in 2021 was “representative of the pent-up demand we all heard about coming out of the pandemic, what with all of the new interest in this space and all of the new capital coming into the MOB market. And, sure enough, that unfolded in the second half of 2021.”

Indeed that strong velocity has continued into the early part of 2022, according to Revista. During its most recent subscriber webcast providing Q1 statistics, Revista presented data showing that Q1 2022 saw sales of $3.8 billion, which is a preliminary figure that is likely to increase as more transactions are discovered and recorded by Revista.

That Q1 volume is the second highest volume for an opening quarter of any year on record since Q1 2017 and it represents a 90 percent increase from the sales volume recorded in Q1 2021, which, of course, turned out to be a record-setting year.

“This is preliminary data,” Mr. Hargrave said during the webcast. “So, that figure will increase, as we’re still cataloguing transactions that occurred within the first quarter.”

With such a strong volume to kick off 2022, Revista’s data indicates that MOB sales have topped $20 billion in the past 12 months (April 1, 2021 to March 31, 2022), the largest volume for such a time frame “we’ve seen since we’ve been tracking transaction activity.”

Could 2022 set another record?

Even after a record-setting volume in 2021, some predict that 2022 could see another record for MOB sales. The HREI™ Editorial Advisory Board (EAB), which represents many of the sector’s top firms, met March 29 in Nashville, Tenn. One of the board members is Christopher R. Bodnar, vice chairman of the U.S. Healthcare and Life Sciences Capital Markets team with CBRE Group Inc. (NYSE: CBRE).

“I think it’s definitely possible (that MOB sales in 2022 could top that of 2021),” Mr. Bodnar said. “The first quarter of 2021 was pretty slow for us and then we ramped up quickly with most of our activity in the second half of the year. For the first quarter of this year, (CBRE) has already transacted on $4.2 billion in deals. This has been a record quarter for us, personally, but if this activity continues, (the sector should) be able to eclipse the numbers achieved in 2021.”

Erik Tellefson, a managing director with Capital One Healthcare in Chicago, agreed with Mr. Bodnar.

“At this point, I would expect medical office transactions to exceed even the volume in 2021,” Mr. Tellefson said. “That was a high-water mark… (But) borrowing costs remain relatively low, (and) I think the industry still orients to the private buyer, developer, private equity firm, balance sheet, bank debt. So that bodes relatively well for the industry.”

“There are certainly a lot of reasons why so many investors are getting into this space,” he said, “because of the stability of our sector as compared to other sectors that have certainly not fared so well, especially during COVID-19.”

Indeed, a wide variety of deep-pocketed investors, including institutional investors, continue to enter the space by acquiring MOBs. Many are doing so through the formation of joint venture (JV) partnerships with long-standing HRE firms that own portfolios of MOBs. In many cases, a JV is often launched with the recapitalization of a portfolio of MOBs owned by the HRE firm in which the new investor acquires a large portion of the ownership. The HRE firm typically retains a smaller percentage of the ownership.

With demand continuing to increase for MOBs from a wide variety of investors, it should come as no surprise that pricing remained high and capitalization (cap) rates, or expected first-year returns, remained low during the year.

For 2021, according to Revista’s data, the median cap rate was an all-time low of 5.7 percent on a trailing 12-month (TTM) basis. Of course, many deals involving the highest-quality properties with credit-rated tenants saw cap rates significantly lower than that, as transactions with cap rates in the lowest 75th percentile of all deals averaged 5 percent. MOB transactions in the highest 25 percent of deals, or those considered value-add transactions, averaged 6.7 percent in 2021 on a TTM basis.

However, with 2022’s economic outlook quite different than in recent years – what with inflation on the rise and the U.S. Federal Reserve Bank indicating that it plans to increase borrowing rates multiple times in coming months – Mr. Hargrave said the folks at Revista often get asked where they think cap rates are heading.

“We tell people that MOB cap rates, historically, have not moved with changes in interest rates, instead they typically move with transaction volumes,” he said. “In recent years, the lowest cap rates (were) in 2021, which had the largest sales volume ever recorded, and in 2017, which, oh by the way, had the second largest volume ever. This could mean that for cap rates to rise materially, we’d probably need to see the total MOB sales volume come down.”

During the HREI board meeting in March, several board members said they believe that with all of the headwinds facing the economy and rising interest rates, cap rates could level off, if not increase ever so slightly.

Devereaux A. “Dev” Gregg, executive VP of development with Charlotte, N.C.-based Flagship Healthcare Properties, said he believes cap rates will “stabilize” in the next year or so. Flagship is both a developer and, through its private REIT, Flagship Healthcare Trust, a buyer of HRE facilities.

“What I don’t see cap rates doing is going down,” he said. “I don’t necessarily see them ‘jumping up’ either, but at the least trend of having cap rates continue to compress, in my estimation, is at least going to slow down.”

Richard M. “Rich” Rendina, chairman and CEO of long-time HRE development firm Rendina Healthcare Real Estate, which is based in Jupiter, Fla., said he agrees that cap rates for MOBs will stabilize in the next year or so. In addition to developing HRE properties, Rendina has become more focused on acquiring assets since forming a programmatic JV partnership with Chevy Chase, Md.-based Artemis Real Estate Partners in 2021.

“I feel like cap rates — we mentioned that 5.7 percent average – and I’m guessing that will stabilize somewhere between that and maybe 5.5 percent,” he said. “Even so, there is still the potential for more compression of cap rates when it comes to core assets. I’m hopeful that assets will be priced according to what asset class they fall into, be they value add, core-plus or core, instead of seeing all of them being priced as core. And I do think that will start to happen.”