From car dealerships to department stores, its seems that almost any property is fair game 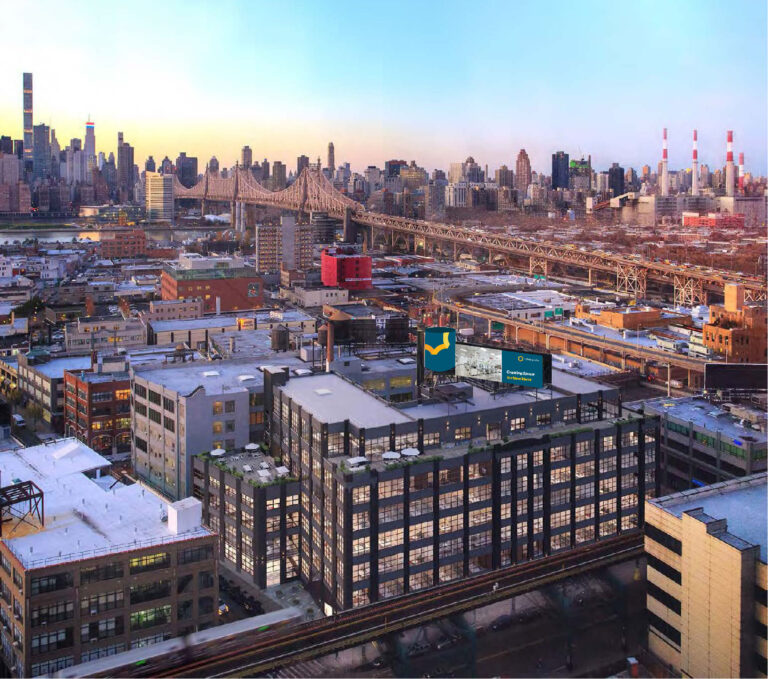 With lab space at a premium in nearly every cluster, life sciences real estate (LSRE) developers and investors have proposed or started construction of a dizzying array of mostly speculative facilities so far this year.

There is a long tradition of converting former office and industrial spaces for life sciences, of course, and many of those are still part of the mix. But it seems like nearly any property type is fair game these days. Conversion and redevelopment projects are planned or already underway at the erstwhile sites of Lord & Taylor department stores, a Honda dealership, a McDonald’s restaurant and more.

Although this is not intended to be a comprehensive list – and perhaps not all of these projects will come to fruition in light of recent economic uncertainty – here’s a look at some of the conversions and redevelopments that have been announced just so far this year.

■ Hatch Life Sciences, Long Island City, N.Y. This life science real estate (LSRE) conversion was actually disclosed last year. But, since it was first reported Dec. 21, we’re going to take the liberty of including it. At that time, local media reported that work was underway for what was then referred to as 43TEN, the life sciences conversion of a seven-story, nearly 210,000 square foot former industrial building at 43-10 23rd St. in Long Island City. By August, construction was well under way for what is now referred to Hatch Life Sciences. Built in 1924, the building was reportedly acquired for $92.5 million in December by a joint venture (JV) of Longfellow Real Estate Partners, a Boston-based firm specializing in LSRE, and Sculptor Real Estate, a New York-based investment firm. Longfellow has told local media that the firms plan to invest another $120 million in the conversion, which is scheduled to take about 19 months to complete. The New York-based investment management firm Square Mile Capital Management provided a $155 million loan for the project. The property, which is within one mile of the Queensboro Bridge, was Longfellow’s first acquisition in the growing New York life sciences market. Suffolk Construction is handling the conversion. For more information, please click here.

■ Sorrento Corporate Center, San Diego. BioMed Realty, part of New York-based Blackstone Inc. (NYSE: BX), kicked off 2022 by acquiring a two-building, 143,999 square foot office-industrial complex at 9940 and 9950 Barnes Canyon Road in San Diego for $115 million, or $799 per square foot (PSF). Local media reported in early January that the facilities are “likely” to be converted to life sciences – an example of the strong demand in the Sorrento Mesa submarket of San Diego. “Demand for life science lab space is so great that BioMed is actively pursuing new development and lab conversion opportunities in the region,” a BioMed spokesperson told the San Diego Union-Tribune newspaper at the time. For more information, please click here.

■ The Newark Center, Newark, Calif. Buchanan Street Partners, a Newport Beach, Calif.-based real estate investment management firm, announced in January that it had acquired Newark Tech Park, a two-building, 99,716 square foot office and life science project in San Francisco’s East Bay. Located at 8000 and 8100 Jarvis Avenue in Newark, the properties were acquired for a total of $26.2 million. The firm plans to make “significant upgrades” to position the project to appeal to both life science and tech users. Buchanan Street has committed $20 million to the conversion, including a new two-story lobby, renovated restroom core, mechanical upgrades and a freight elevator. CBRE Group Inc. (NYSE: CBRE) announced in July that it will lease the 50,000 square foot 8100 facility, which is scheduled to deliver in late 2022. For more information, please click here.

■ 5005 McConnell Ave., Los Angeles. In March, a JV of Los Angeles-based HATCHspaces, Denver-based NexCore Group LLC and Chicago-based Nuveen Real Estate acquired a 56,300 square foot industrial facility in Los Angeles with plans to redevelop it into a biomanufacturing facility. While the price was not disclosed at the time, data from the healthcare real estate (HRE) data service RevistaMed indicates the JV paid $46.7 million, or $829 PSF, for the property 5005 McConnell Ave. The buyers say that the facility will be repurposed into the headquarters and manufacturing facility for Armata Pharmaceuticals (NYSE: ARMP). The seller was Montana Avenue Capital Partners. For more information, please click here.

■ 222 Fifth, Seattle. In April, local media reported that Dallas-based Lincoln Property Company (LPC) and its JV partner, Boston-based Intercontinental Real Estate Corp., planned to start construction during Q2 of a life sciences building at the site of a recently closed McDonald’s near Seattle’s Space Needle. The McDonald’s, which opened at the 222 Fifth Ave. N. site in 1980, closed April 1. Da-Li Development USA LLC, a subsidiary of Taiwan-headquartered Da-Li International, acquired the acquired the property in separate transactions in 2018 and 2019 for a total of $18.1 million, according to public records. Da-Li initially proposed a residential condominium tower, then an office tower, then ultimately a speculative life sciences building last summer. Da-Li secured the entitlements to proceed with the project, but sold the property and the approved project to LPC for a reported $42 million late last year. Plans on file with the city call for a nine-story, 195,000 square floor facility with eight floors of life sciences space above street-level retail, plus 104 spaces of below-grade parking. In addition to LPC and Intercontinental, the project team includes San Francisco-based design and architecture firm Gensler, general contractor Lease Crutcher Lewis and broker Paul Carr of CBRE’s Seattle office. For more information, please click here.

■ 777 Industrial, San Carlos, Calf. San Francisco-based Presidio Bay Ventures is under construction for a 146,000 square foot, purpose-built, “Class A” lab facility in San Carlos, about midway between San Francisco and San Jose. The development at 777 Industrial Road is replacing a former Honda car dealership. Square Mile Capital announced in July that had provided $118 million in financing for the project. The borrower is a partnership managed by a commercial real estate investment, development and operations firm “focused on delivering diverse product types nationwide.” Presidio Bay acquired the property in November 2020. For more information, please click here.

■ 5000 Shoreline Court, South San Francisco. In May, local media reported that developer DivcoWest has secured $124 million in financing from Deutsche Bank AG (NYSE: AG) to redevelop a shoreline office building in South San Francisco into a life sciences complex. The San Francisco-based firm got the financing after paying $164.5 million for the three-story, 138,400 square foot building on 8.6 acres at 5000 Shoreline Court in January. CBRE brokers Mike Walker and Brad Zampa arranged financing for its purchase and the conversion. The property is said to be one of the few remaining in South San Francisco that is suitable for conversion to life sciences use. At the end of 2021, Bay Area life sciences buildings had a vacancy rate of 2 percent, according to CBRE. For more information, please click here.

■ Lord & Taylor department store conversions, Greater Boston. The Boston Globe reported in July that plans are in the works to convert three former Lord & Taylor department store buildings into lab space. HBC Properties, the real estate arm of Hudson’s Bay Company, a retail holding company that also owns Saks Fifth Avenue, reportedly plans to convert the buildings at the Natick (Mass.) Mall, the Burlington (Mass.) Mall and the South Shore Plaza in Braintree, Mass. Plans call for the facilities, which would provide about 120,000 square feet each, to be ready for tenant move-in by the end of next year. John Boyle, executive vice chair of Cushman & Wakefield, who advised Hudson’s Bay on the deal, told The Boston Globe that the department stores’ physical infrastructure, including high ceilings, high-bay loading docks and ample parking, make them “absolutely perfect for lab buildings.” Hudson’s Bay sold the Lord & Taylor brand in 2019, but the company that acquired it filed for bankruptcy in August 2020 and all the Boston-area stores had closed by early 2021. For more information, please click here.

■ Boren Labs, Seattle. Oxford Properties Group, a global real estate investor and asset manager based in Toronto, announced in July that it has completed the conversion of a 10-story, 136,000 square foot office building in Seattle’s South Union area into Boren Labs, a speculative life sciences facility. Oxford, which has invested $3 billion into life sciences facilities since the start of 2021, acquired the building at 1930 Boren Ave. for $119 million in April 2021. Boren Labs includes ground-level retail spaces and nine stories of lab and support office space. For more information, please click here.

■ One Preserve, Rockville, Md. It was reported in July that Boston-based Longfellow Real Estate Partners had acquired a seven-story, 191,000 square foot, “Class A” office building in Rockville that it plans to convert to lab space. Longfellow paid about $42 million for the property, which was the former home of Booz Allen Hamilton Inc. (NYSE: BAH). The seller was Federal Capital Partners affiliate One Preserve Parkway LLC, according to local media reports. Longfellow officials said at the time that they planned to make capital improvements to the building that would accommodate a variety of future lab users. The conversion is slated to deliver near the end of 2023. For more information, please click here.

■ 1500 and 1550 Research Blvd., Rockville, Md. Dallas-based Velocis, a private equity real estate manager, and Arlington, Va.-based Altus Realty, a real estate investor and developer, announced in August that they have acquired a two-building office complex in the Shady Grove submarket of Rockville, outside of Washington, D.C., with plans to convert it to life sciences. The two buildings at 1500 and 1550 Research Blvd. have a combined 89,640 square feet of space and are amid what the JV calls “the most sought-after biotech cluster within Maryland’s nationally recognized life sciences market.” Velocis Partner Mike Lewis said the life sciences submarket has a vacancy rate of less than 1 percent, “indicating that demand far outweighs supply.” For more information, please click here.

■ The Curtis Biospace, Philadelphia. In August, Keystone Development & Investment secured a $265.2 million loan to fund its ongoing conversion of the historic former Curtis Publishing Company building at 601 Walnut St. in Philadelphia’s Center City into a “life sciences ecosystem,” the Philadelphia Business Journal reported. The three-year loan with extension options comes from Nuveen Real Estate, an affiliate of Teachers Insurance & Annuity Associates of America (TIAA). The capital will enable Keystone to convert another 200,000 square feet in the 12-story, 912,245 square foot building into life sciences space during the next three years. Keystone previously invested $70 million during the past two years to convert 200,000 square feet of traditional office space into labs, and that space is 85 percent leased. For more information, please click here.

■ Observation Labs, Germantown, Md. In August, Guardian Realty Investors LLC  unveiled its new life sciences lab location at 20400 Observation Drive in Germantown. Dubbed Observation Labs, the adaptive reuse of the former industrial and technology building is slated to bring about 15,000 square feet of ready-to-occupy spec suites ranging from 3,800 to 7,800 square feet, delivering in Q1 2023, as well as build-to-suit spaces of up to 55,000 square feet. Guardian is a developer and operator of office, multifamily and specialized facilities in the Washington, D.C., area. Other members of the project team include Ewing Cole Architects, Riparious Construction and JennErik Engineering. Jones Lang LaSalle Inc. (NYSE: JLL) is handling leasing. For more information, please click here.

Are you aware of other life sciences real estate conversion projects that have been proposed or which are underway? Please let us know at Editor@BREInsights.com.