Volume will top $16 billion when Revista discovers, adds up the year’s final transactions 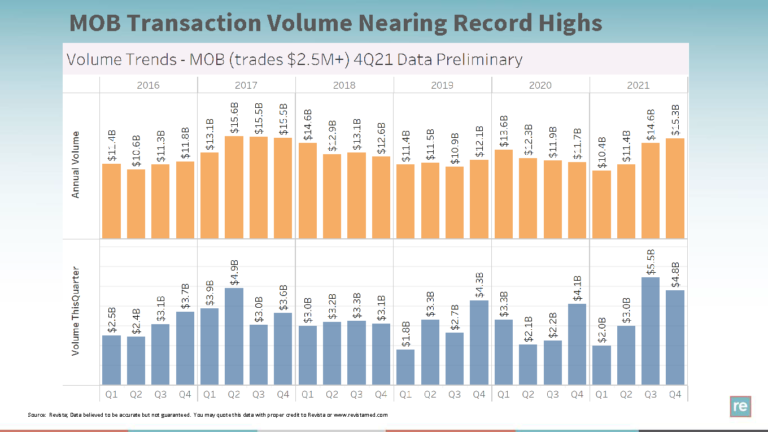 Final medical office building (MOB) sales for 2021 are still being tabulated, but preliminary data from Revista suggests that last year’s total volume will surpass $16 billon, breaking the previous record of $15.6 billion in MOB sales recorded in 2015.
(Slide courtesy of Revista)

As of late January, Revista Principal Elisa Infante Freeman told listeners, the MOB sales volume for 2021 stood at $15.3 billion. However, that figure was based on preliminary data, meaning Revista had not yet gathered or compiled all of the transactions that took place late in the year.

“My guess is, by the time we release final stats in March, we’ll be at (a record MOB volume for 2021),” Ms. Freeman said during the webcast, adding that the firm will provide more detailed data during its upcoming “2022 Medical Real Estate Investment Forum,” which will be held in Coronado, Calif., outside of San Diego, March 2-4.

Regardless of the final tally, last year’s record-setting level of MOB sales activity also blew away the total for 2020 – which wasn’t a bad year, either. Despite the COVID-19 pandemic, the 2020 total came in at $11.7 million, keeping intact a streak of seven straight years (now eight) with the annual volume topping $11 billion.

The relatively strong sales volume in 2020, followed by an increase of more than 30 percent in 2021, add to the growing heap of evidence that MOBs are a crisis-resistant, safe harbor investment that can withstand difficult times, including recessions and pandemics. It’s a thesis that veteran MOB investors have embraced for many years, and one that has more recently attracted many new entrants to the space.