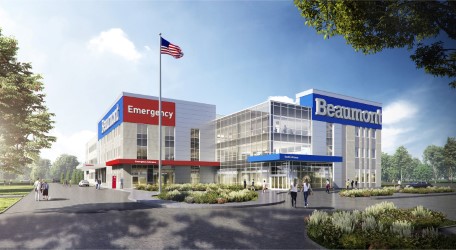 One of the two large, comprehensive, one-stop outpatient facilities that NexCore Group LP is developing for Beaumont Health in Michigan is in Lenox Township, about 40 miles north of Detroit. The Beaumont Health Outpatient Care Campus at Lenox is scheduled to open this coming September. (Rendering courtesy of NexCore Group)

In growing Lenox Township, about 40 miles north of downtown Detroit – basically straight up U.S. Interstate 94 — the Beaumont Health Outpatient Care Campus at Lenox, a three-story, 110,000 square foot medical office building (MOB) offering a wide variety of services and housing an ambulatory surgery center (ASC), a 24/7 emergency department (ED), and a pharmacy is expected to open in September. It’s being built on a site just off I-94 at 26 Mile Road.

The new outpatient campus will provide Beaumont, whose closest hospital is about 40 minutes away in Troy, with a presence in a medically underserved, exurban area expected to grow substantially from its current population of 10,953, according to the U.S. Census Bureau.

Down in Livonia, a longstanding, well-established suburb 15 miles west of Detroit, a very similar but slightly larger MOB — the four-story, 130,000 square foot Beaumont Health Outpatient Care Campus at Livonia — is expected to open by the end of the first quarter (Q1) of 2022. Its service offerings, including cancer care, full imaging, a laboratory as well as an ASC, ED and a pharmacy, will be very similar to those offered in Lenox Township.

The strategy behind building the new Livonia outpatient campus, which is under construction on a site just off I-275 at 7 Mile Road, is