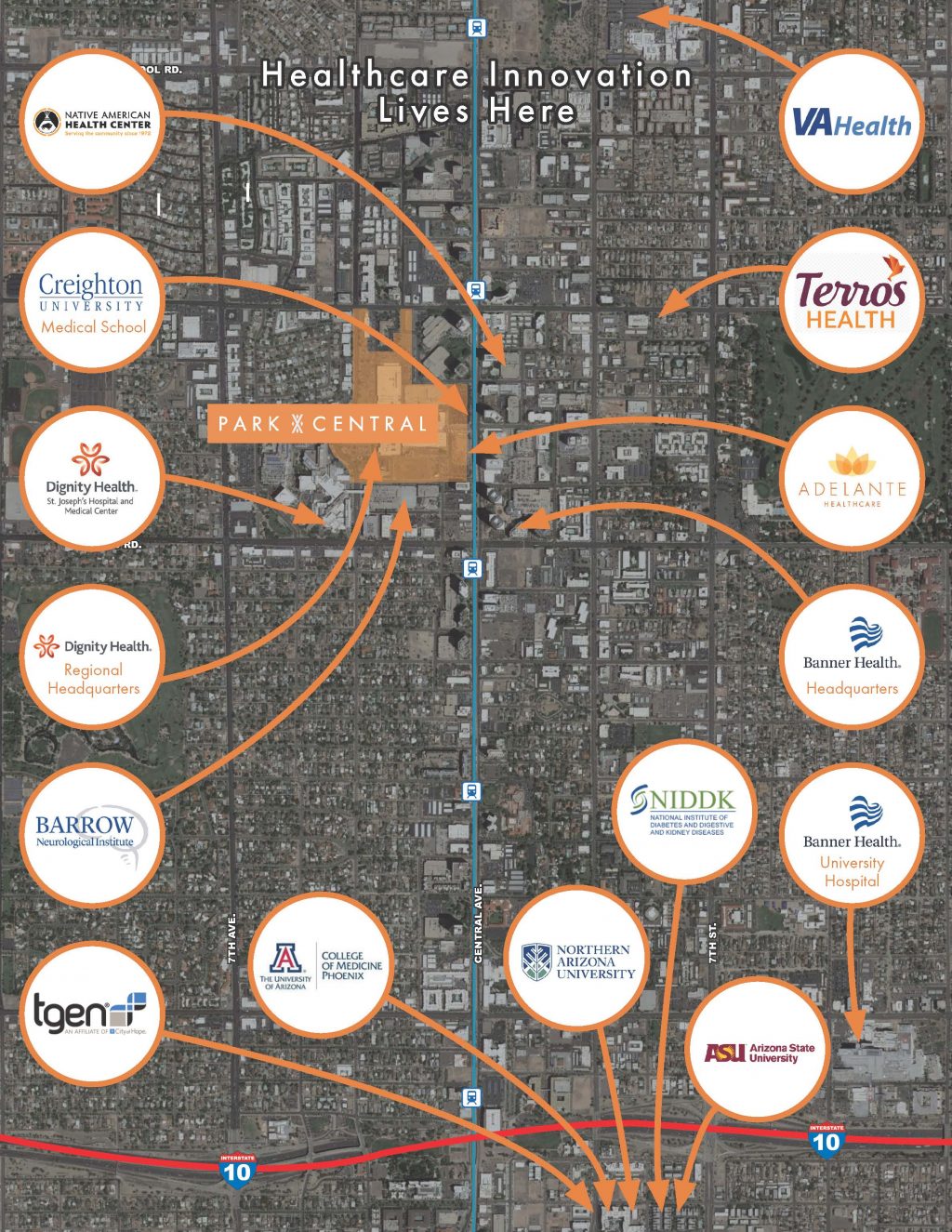 PHOENIX (November 19, 2020) – In the nation’s fifth largest city, a unique hub for healthcare and bioscience industries is rising in a revitalized part of the community.

Phoenix’s healthcare hub is becoming increasingly critical as a result of the pandemic, but a boom was already underway in midtown Phoenix, making healthcare and bioscience among the fastest-growing industries in the greater Phoenix marketplace.

This hub deserves a closer look because it is an ideal ecosystem for healthcare innovation.

“This is the highest density of bioscience healthcare workforce in Arizona, and sits among the West’s leaders,” said Christine Mackay, director, Phoenix Community and Economic Development. “Quality, experienced workforce is one of the first reasons life and bio-science companies are selecting Phoenix.”

The area is home to Creighton University’s new $100 million Health Sciences Campus, which is currently under construction. At the core geography is a major health system — Dignity Health’s headquarters on site at the iconic redeveloped former outdoor mall and now multi-use hub, Park Central. Next door is the prestigious St. Joseph’s Hospital and Medical Center, and 800 yards away is Banner Health System’s headquarters.

Just two miles to the south of this core lies the 30-acre Phoenix Biomedical Campus, where all three major Arizona public universities — Arizona State University, University of Arizona and Northern Arizona University — along with the Dignity Health Cancer Institute at St. Joseph’s Hospital and Medical Center, the Translational Genomics Research Institute (TGen) an affiliate of City of Hope and Exact Sciences are a few of its tenants.

Add to this the business-friendly climate in Arizona, and the result is that projects such as Park Central are actually adding office tenants in the pandemic instead of losing them. The project is seeing tremendous activity from health-related tenants seeking a place in this magnet of innovation.

Some of the numbers are staggering, as Arizona is ramping up its overall healthcare infrastructure.

— Construction is underway or about to begin inside the city of Phoenix for bioscience healthcare facilities with a capital value of more than $3 billion, according to the data compiled by Phoenix Community and Economic Development
— More than 4.5 million square feet of new Phoenix bioscience healthcare facilities are under development.
— More than 7,000 new bioscience healthcare jobs will be created in Phoenix during this time.
— Midtown Phoenix has ten major healthcare and education centers, including a university, two large hospital campuses and several new bioscience centers.
— Venture capital funding in greater Phoenix for bioscience healthcare is growing at one of the fastest rates in the country.
— And as a result, construction of supporting residential, lodging and retail uses are booming in the area
— In November 2020, there are more than 20 cranes on the Downtown Phoenix skyline, more than any other time in its history. Rider Levett Bucknall’s “Crane Count” placed Phoenix fourth in the U.S. and one of only five cities with an uptick in mid- and high-rise development in the third quarter 2020 compared to a year earlier

All of this growth and innovation in healthcare, bioscience and medical devices has created a critical mass for Phoenix that is cementing its place as a healthcare destination for institutions, healthcare professionals, patients and all business that support them.

“The healthcare and bioscience industries are really pacing economic growth in Arizona,” said Chris Camacho, President & CEO of GPEC. “Not only are they creating jobs and investment, the overall quality of the healthcare provided in Arizona is world-renowned and is an economic development tool in itself. Healthcare is making our entire state a more desirable place to live and work.”

One of the busiest locations for healthcare construction centers around Park Central in midtown, where several key initiatives are taking place. Along with the new Creighton University Health Sciences Campus, which is scheduled to open in 2021, it is home to a new facility for West Coast Ultrasound Institute and the new WearTech medical device lab. Park Central is already home to Dignity Health’s regional headquarters and is adjacent to the St. Joseph’s Hospital complex — where a new tower is being built for Barrow Neurological Institute.

Sharon Harper, Chairman and CEO of Plaza Companies, one of the co-developers of Park Central, said that the growth in the area is the result of a purposeful effort to broaden the regional economy.

“It is critical to have broad-based economic growth if we truly want to maximize Phoenix’s potential,” Harper said. “Healthcare and bioscience are important industries in that they have a long-term, positive impact on our communities in many ways. They enable growth in other industries and create the kind of economic impact that has a huge ripple effect on other industries.”

Mackay said that the overall growth in healthcare and bioscience has created a ripple effect throughout the community in industries that are also benefiting from the increased investment.

“We’ve already seen a significant uptick in construction activity in general in the midtown and downtown areas, and healthcare has played an important role in that,” she said. “But the healthcare boom is also leading to a boom in residential construction, retail, service industries, education and much more. It’s a leading indicator for a broader base of economic growth.”

And the healthcare boom is not just about quantity, it’s about quality. The healthcare and bioscience organizations that are growing and expanding in the midtown Phoenix area are among the most highly regarded in the country and the world, further enhancing Phoenix’s reputation as a medical hub.

“When you see Creighton University make a commitment as they have to Phoenix, and when you see the growth and expansion of Barrow Neurological Institute and Banner Health in the area, it’s clear that Phoenix’s reputation for quality health care is growing,” Camacho said. “We look forward to seeing this trend continue in the future and the positive impact it will have on our overall quality of life.”

About City of Phoenix
America’s fifth most-populous and fastest-growing city, Phoenix added more population than any other city in each of the past four years. In bioscience healthcare, the Phoenix epicenter is seeing more than $3 billion in construction underway creating more than 4.5 million square feet of primary healthcare and research facilities through the end of 2021. Phoenix has the shortest average commute time of any of the top 25 most-populous U.S. cities. The city is home to three of the five largest city parks in the world. For more information, see Phoenix.gov/EconDev or Phoenix.gov/Newsroom/CED.

About Plaza Companies
Plaza Companies, based in Peoria, Arizona, is an esteemed leader in the developing and managing of medical office and commercial office properties, technology and bioscience facilities, mixed-use properties and senior housing communities. Since its founding in 1982, this full-service, specialized real estate firm has established a proud portfolio stretching across the greater Phoenix area of more than 5.5 million square feet valued at more than $1 billion. For more information about Plaza Companies, visit ThePlazaCo.com.