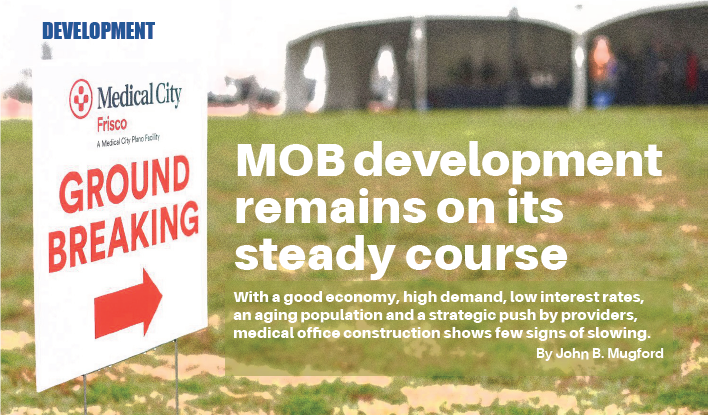 Despite some potential headwinds for MOB construction, all signs, including the opinions of HRE professionals and data from research firms such as Revista, indicate strong results now and in the future

During the boom years for medical office building (MOB) development prior to the Great Recession, financing was easy to get and the amount of square footage delivered reached record levels.

When the downturn hit, the country was flush with this new supply of MOB projects – many of which were developed speculatively by firms new to the healthcare space. The result was a vacancy rate that climbed to as high as 13 percent – a figure not typically seen in a product type where most of the experienced developers only start projects with strong pre-leasing activity.

That overbuilding, as well as the ripple effects caused by the Great Recession, resulted in some slow times for the professionals and companies involved in building MOBs. But those painful couple of years and circumstances led to a healthier development landscape.

Since the two or three years after the Great Recession, the amount of MOB development taking place nationwide has remained quite steady, aside from a few minor fluctuations taking place in certain years.

The latest wave of solid construction numbers is the result of several factors, according to professionals involved in healthcare real estate (HRE) development:

■ the aging of the country’s population, and

■ growing competition among healthcare providers to retain current patients and attract new ones by delivering outpatient services in technologically advanced facilities that are well-branded and situated in convenient, retail-like locations

“We’re definitely seeing the volume pick up in activity, with the healthcare systems looking for developers to do any number of projects,” Jake Dinnen, senior VP of development with San Diego-based PMB, told the audience during the InterFace Healthcare Real Estate West conference March 6 in Los Angeles. “And it has to do with the health systems looking to having more of a presence where patients are, as well as the aging population.”

With all of the demand being shown to acquire MOBs these days from a wide range of investors, robust development numbers are welcome news, as it means there will likely be more facilities to acquire in the future. That strong investor demand has led to record-setting MOB sales in recent years, with total annual sales volumes topping $10 billion every year from 2015-18, according to two leading MOB research firms, Arnold, Md.-based Revista and New York-based Real Capital Analytics Inc. (RCA).

(Please note: For the purposes of this article, we use the term “MOBs” as a shorthand to describe the full range of outpatient product types listed above.)

Revista’s third annual development survey, which was produced in collaboration with Minneapolis-based Healthcare Real Estate Insights™, shows that new project completions recorded in 2018 kept pace with the strong years of 2016 and 2017.

(HREI™ will have complete coverage of the 2019 Outpatient Healthcare Real Estate Development Report in the May/June 2019 edition, including rankings of the top third-party development firms in the HRE space.)

“Overall, outpatient construction completions were up in 2018 compared to 2017,” Mike Hargrave, Revista co-founder and principal, tells HREI™. ”While there were fewer projects completed in 2018, both the square footage and value were higher than in 2017 and 2016. This data supports the trend of developers and contractors delivering larger and more complex outpatient projects in recent years.”

Revista isn’t the only firm reporting that MOB project completions have remained steady in recent years, as both Colliers International and Marcus & Millichap, in separate MOB reports, also report strong construction numbers from 2016-18.

According to Colliers and its 2019 Healthcare Marketplace Report – which uses a different criteria and came up with different results than Revista – 20.9 million square feet of MOBs were delivered in 2018, an increase of about 10 percent over 2017 and about the same level as in 2016.

Marcus & Millichap’s recently released National Report on Medical Office Buildings for the first half of 2019 found that 12 million square feet of MOB space was completed in 2018, which is the highest level it has recorded since 19 million square feet was added in 2009.

In its report, Marcus & Millichap indicates that despite the recent uptick in HRE development, supply still might not be keeping up with demand, as the national MOB vacancy rate declined to 8.1 percent in 2018 and is expected to fall below 8 percent in 2019.

As for who is developing the country’s new or redeveloped MOBs and other outpatient projects, Revista tracks whether such projects are financed and owned by the providers themselves or by third-party development firms.

“In most years, third-party firms develop anywhere from 25 percent to 30 percent of the projects, with the health systems developing the rest,” Revista’s Mr. Hargrave notes. “So that has remained quite steady over the years, including 2018.”

Of course, that means that the healthcare providers themselves, most of them health systems, self-developed and self-financed about 74 percent of the MOB projects completed in 2018.

In recent years, many professionals involved in the healthcare space have argued that more health systems, with all of the financial pressures they are facing, should adopt what is considered a “corporate approach” to their real estate strategy concerning non-core properties – in other words, most facilities other than their hospitals. That corporate approach entails leasing outpatient and perhaps other space in facilities developed, owned and managed by professional HRE firms and investors.

However, many health systems remain committed to owning the MOBs they occupy, especially facilities in which they are the largest, or even sole, tenant. Such health systems often say that it makes financial sense, what with their low-cost of capital and tax-exempt status for owning properties, for them to self-develop and own such facilities.

On the other hand, many developers and advisors say that most health systems’ capital would be better invested and generate larger returns if it was used to grow the service lines they offer to patients instead of on real estate. They note that projects developed, owned and managed by experienced, professional HRE firms are often of a higher quality and remain that way for years to come. Having a third-party firm own outpatient facilities also gives the health system more flexibility in terms of its occupancy of the space, allowing it to walk away from a lease, or reduce the amount of space it occupied in a building, at a later date.

Todd Varney, chief development officer with Denver-based NexCore LP, a 15-year-old HRE firm, tells HREI™ that the company is “very capable of showing health system clients a compelling case for using a (third-party) developer to build, own and manage facilities for them. That’s where we spend a lot of time on the business plan with them, validating their cost of capital versus ours and showing them a better way to do it, a more efficient way and (a better) speed to market as well.”

He adds that a growing number of hospital systems are exploring having third-party developers – especially those that can provide an efficient cost of capital – to build and own facilities for them.

As many of the country’s health systems continue to build out their ambulatory networks, they are looking for high-traffic, convenient sites in new and growing markets in which to locate outpatient facilities to help attract new patients.

What this means is that hospitals or health systems continue to be the major driver of MOB projects, be they on- or off-campus facilities.

In 2018, according to Revista, 17.3 million square feet, or 71 percent of the total MOB space completed, was on campus or was in off-campus locations with hospital or health systems as tenants.

Off-campus projects not affiliated with a hospital or health system accounted for the remaining 29 percent of the projects, or 6.95 million square feet of space.

Third-party HRE development firms accounted for about 38 percent of the off-campus, non-affiliated MOB space developed in 2018, according to the Revista survey. Physician practices or users were most likely the developers of the other 62 percent of those projects.

According to Colliers’ data, a vast majority of the MOB projects – about 71 percent – slated for completion in 2019 will be in off-campus locations. 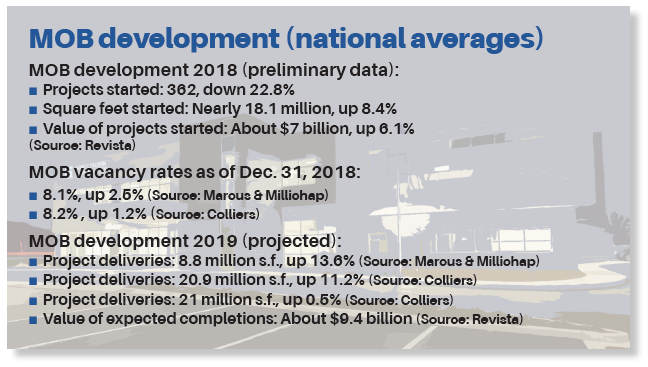 According to Revista and Colliers, the MOB construction pipeline remains steady for the year or so ahead.

As for Colliers, the firm projects that 336 MOBs with a total of 21 million square feet of space will be delivered nationwide in 2019 – a figure that is nearly equal to the amount of space delivered in 2018.

As 2018 came to a close, according to Colliers’ data, there were 388 MOB projects in progress nationwide with total of 28.2 million square feet and a value of $12.6 billion. Not all of those projects, however, will be completed in 2019.

Indeed, a number of HRE professionals acknowledge that while the MOB sector remains strong and development prospects are steady, there are a few potential headwinds looming.

Among those are, as noted by Marcus & Millichap, rising construction costs, which can drive project costs to levels in which rents could be too high to attract physician practices and health systems.

Other potential pitfalls include dwindling yields for new projects, increasingly difficult request for proposals (RFP) processes that place too many demands on developers, and other factors. As a result, some HRE development firms now find themselves passing on some of the MOB project RFPs that come their way.

Even so, members of the Editorial Advisory Board of HREI™, which met in November 2018, said they remain optimistic about the future of the MOB development arena. In part, they said, that’s because of the growing need for health system to expand their outpatient networks during a time when their reimbursements continue to fall.

“The real estate departments and facility folks at the health systems only have so much (financial) bandwidth,” said Steve Barry, president of Rendina Healthcare Real Estate, “and when you’re looking to roll out an aggressive ambulatory expansion plan I still think there is a role for groups like ours that can provide a nimble service and go out and acquire land and secure the approvals and provide a full-service development solution.”

“So I think we’re going to see more opportunities (moving forward),” he noted.

Darryl Freling, managing partner with Dallas-based MedProperties Real Estate Advisors, added during the meeting that developers who can adapt to the changing market and meet the needs of investors and healthcare providers alike, are likely to continue to find success.

“I think the hospital ambulatory strategies will continue, and that’s going to provide a lot of opportunity for developers to develop outpatient facilities, both on-campus and in suburban locations,” he added.

Editor’s note: In compiling data for its 2019 Outpatient Healthcare Real Estate Development Report, Revista received survey responses from 25 third-party companies. It gathered the rest of the information and identified other projects from another 140 companies. To participate in future surveys, please contact Mike Hargrave at Revista at mike@revistamed.com.