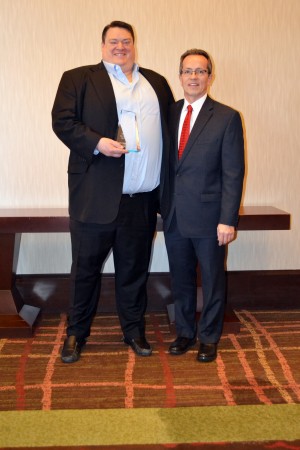 At 6’ 6”, Erik Tellefson was a towering presence for his college football teams in the mid-1990s. Today, he remains so on a different playing field, healthcare real estate (HRE), selected by his peers as the HRE Executive of the Year as part of the 2015 HREI Insights Awards™.

“I am honored to have been named this year’s Healthcare Real Estate Executive of the Year,” Mr. Tellefson says. “This industry is home to many innovative, trailblazing professionals, and this recognition by HREI™ magazine and my peers is very special.”

It was difficult to miss big No. 70 on the gridiron for the Western Illinois University Leathernecks in 1992-93, and for the Truman State University Bulldogs from 1993-96, where Mr. Tellefson wore No. 75. Similarly, the former offensive tackle is instantly recognizable to his clients and colleagues at meetings and HRE conferences throughout the year.

But more than his size sets him apart.