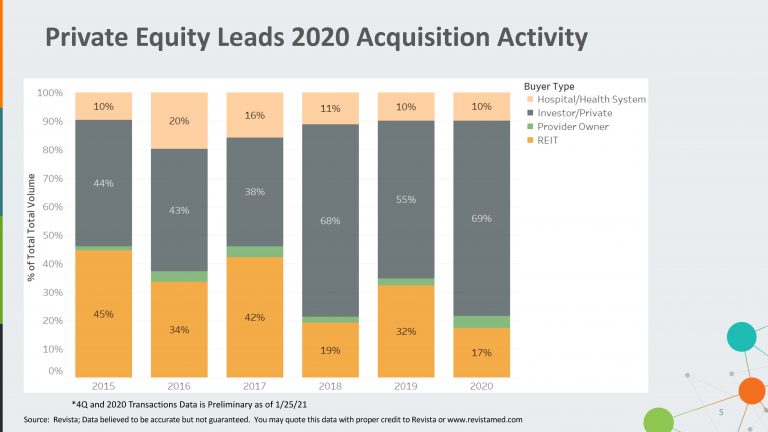 For the third straight year, private equity (PE) buyers dominated the MOB sales acquisition market in 2020. As a cohort, PE firms accounted for 69 percent of the MOB sales volume in 2020, up from 68 percent in 2018 and 55 percent in 2019. Source: Revista

This might be considered a somewhat boring news lead: Most of the statistics used to reflect the state of the medical office building (MOB) sector, including occupancy, construction completions and starts, absorption of new space, the sales volume and pricing, remained steady in 2020.

Boring? Far from it, lest we forget that the past year included a worldwide disruptor and health crisis the likes of which most of us have never experienced in our lifetimes and, hopefully, never will again.

And yet, MOBs continue to march on their steady course, according to data presented during a recent virtual presentation by Arnold, Md.-based Revista, a firm that compiles nationwide healthcare real estate (HRE) facilities information for its subscribers, with a heavy focus on MOBs.

As noted, the occupancy of MOBs throughout the country – Revista’s data was focused on the top 50 markets – stood at 91.4 percent on a trailing 12-month (TTM) average as of the end of the fourth quarter (Q4) of 2020. That was the highest occupancy rate since Q1 2019.

In addition, the absorption of space by MOB tenants in the top 50 markets remained strong throughout 2020, with three of the quarters seeing absorption numbers topping 4.1 million square feet. Only Q3 saw a drop in those numbers, with just 600,000 square feet being absorbed in a drop that was most likely caused by disruptions related to the COVID-19 pandemic.

“So, when we look at these metrics, you can look at the TTM occupancy stat, and you can see it is really remarkably stable, especially during this pandemic that has unfolded during 2020,” said Revista Principal Mike Hargrave. “You can see that absorption is generally, especially in 2020, outpacing completions.”

Revista presented these MOB statistics and more during a virtual presentation Jan. 26 as the first installment in a series of six such webcasts it plans to present during the next six months. As a result of the pandemic, Revista’s “Content & Connections: A Virtual Event Series” takes the place of the firm’s annual in-person conference typically held in late January.

In other data presented, Revista noted that MOB sales in 2020 totaled $10.2 billion, marking the seventh straight year the volume has topped the benchmark figure of $10 billion.

According to Ms. Martin, the $10.2 billion in MOB volume in 2020 can still be considered “preliminary” as of late January, with more transactions likely to come to light and be calculated by the firm’s research team.

“We had such a flurry of closings happen at the end of December, and we are still parsing through those,” she said. “There are still more (transactions) coming in, so this ($10.2 billion figure) is definitely going to be revised upward. I wouldn’t be surprised if it doesn’t get close to or surpass $11 billion, which is right in line with what we’re typically seeing (in recent years) in the sector.

“So, considering the year we’ve had in 2020, with all the shutdowns, with so many people working from home, so many places seeing COVID spikes, it’s pretty amazing to see this amount of activity in the sector and so much interest.”

Ms. Martin referenced a few of the larger deals taking place late in the year, including December.

“Welltower (NYSE: WELL) increased its liquidity (with) two large portfolios that they sold a significant stake in,” Ms. Martin noted, “but which they still manage. One was with Invesco for $850 million, another one with Wafra for $550 million, although part of that is going to be closing in 2021.”

“We’re going to be having a session focused on noteworthy deals coming up next month,” Ms. Martin added, “and we’ll have a panel of speakers in taking a bit more of a deep dive on some specific transactions from 2020. So, don’t miss that.”

When it comes to pricing for MOBs that sold during 2020, Revista’s data indicates that capitalization (cap) rates, or first-year estimated returns, remained steady in 2020, with the median dropping to 5.9 percent on a TTM basis after remaining above 6 percent for the past 11 quarters.

Only the top 25th percentile of MOB deals – the priciest – saw an increase in cap rates or a drop in pricing.

Revista’s data indicates that the average cap rate for the top quartile of deals in Q4 2020 increased to 4.6 percent (TTM) after hovering around 4 percent for the past dozen or more quarters.

“Pricing is still very competitive,” Ms. Martin said. “We actually saw a compression towards the end of the year. For the top 75th percentile, the median cap rate was 5.5 percent – I mean you’re talking about a quarter of the trades in 2020 took place under a 5.5 cap.”

During the presentation, Ms. Martin and Mr. Hargrave presented plenty of additional 2020 statistics concerning MOBs. Here’s a look at some of them, with a focus on the sales market:

■ With California struggling for much of year with the COVID-19 pandemic, the Los Angeles MOB market has experienced some “negative absorption,” Ms. Martin noted, “and yet Los Angeles’ MOB sales volume was almost double the runner-up in terms of closings last year. So, it’s clearly had no effect in terms of sales activity in that market … and I know you’re probably saying, ‘Okay, well Los Angeles is just really expensive.’ But look at the square footage, as 1.7 million square feet traded in Los Angeles. There was just a lot of activity … but the average cap rate was 5.5 percent and a lot of the deals that traded ran into the 4 percent range. So, it’s still very competitive (in Greater Los Angeles) and a lot of activity despite everything going on.”

■ The country’s healthcare-focused real estate investment trusts (REITs) saw their total share of acquisitions in 2020 fall to a low point in the past five years. According to Revista, the REITs accounted for just 17 percent of all acquisitions in 2020, down from 32 percent in 2019. “The REITs were a little bit slower in 2020,” Ms. Martin said, “as all of the upheaval in the markets” caused them to take a bit of a pause. She added that the REITs were net sellers of MOBs in 2020, as they accounted for about 28 of the dispositions in the market. “A large chunk of that is going to be Welltower, but there certainly were other REITs refining their portfolios during 2020.”

■ While there was plenty of talk last year that hospitals and health systems seemed to be increasing the number of MOBs they were buying, the buyer type as a whole accounted for just 10 percent of the year’s volume – basically equal to 2019 and almost the same as in 2018, when health systems accounted for 11 percent of purchases. “However, (health systems) only sold 5 percent (of the dispositions), so they were actually net buyers during 2020. This is a trend that we’re keeping on top of because, ideally, you’re wanting to see them lose share in terms of ownership. You want them to sell more than they’re buying.” ❏