Feature Story: MOB sales were $2B in Q3, with occupancies steady

During webcast, Revista and Anchor officials provide update on the sector 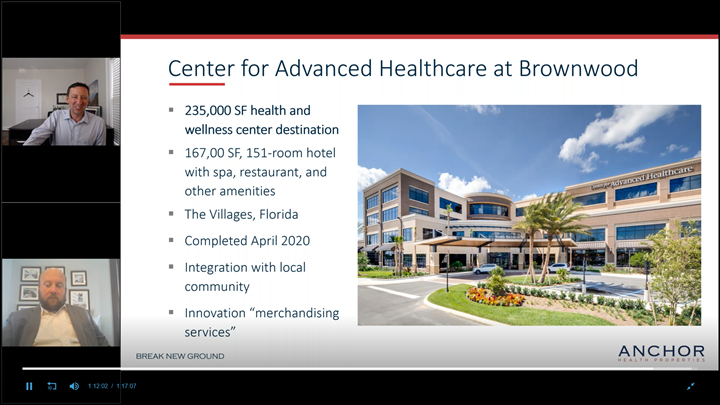 MOB sales have certainly been a bit sluggish since the onset of the COVID-19 pandemic, but not as slow as might’ve been predicted when the crisis first hit.

In fact, according to the latest MOB sales data from Arnold, Md.-based Revista, which provides a variety of HRE information for its subscribers, the volume was about $2 billion in the third quarter (Q3), matching the $2 billion recorded in Q2.

While the Q3 figure is still preliminary, it brings the year-to-date volume for 2020 to about $7.2 billion. It should be noted that Revista’s statistics include only sales involving “pure” MOB outpatient facilities (not administrative buildings) topping $2.5 million.

“Total volume is actually holding pretty steady,” said Revista Principal Hilda Martin during the firm’s Oct. 20 virtual 3Q Medical Real Estate Update and Outlook. “And if you look at the year-to-date total of $7.2 billion, that’s not far off from last year’s volume of $7.8 billion (through the first three quarters). In fact a lot of investors, such as Anchor (Health Properties); MBRE, now Remedy Medical Properties; Hammes; and Montecito Medical are remaining quite active.”

Ms. Martin was joined on the webcast, which provided a variety of MOB sector information and updates, by Revista Principal Mike Hargrave, as well as two executives, CEO Ben Ochs and James Schmid, the chief investment officer, with Media, Pa.-based Anchor Health Properties, one of the MOB sector’s most-active investors and developers in recent years.

Although the year-to-date volume is indeed stronger than what many might have anticipated at the outset of the pandemic, Q4 will need to be a strong one to keep pace with the MOB sales volumes of recent years, as Q4 2019’s volume was a robust $4.3 billion, bringing the year’s total volume to $12.2 billion.

Total MOB sales have topped $10 billion during each of the past five years, according to Revista data, with the past three years each topping $12 billion. The all-time best year recorded by Revista was 2017, when the MOB volume was $15.9 billion.

Mr. Schmid of Anchor, which expects to make MOB acquisitions totaling anywhere from $400 million to $500 million in 2020, said “the first half of the year, especially from February through June, saw a very limited amount of transactions.

“Some (deals) that had been under contract (prior to the pandemic) traded during that time, but there was a fair amount of disruption in the debt markets. And obviously, the equity REITs traded off for a good portion of that time, so it took a segment of the investment population out of the market.

“But our observation is that for the third quarter and the fourth quarter, people are trying to make up for lost time,” Mr. Schmid continued. “And there was a lot of comfort gained with the performance of MOB owners’ portfolios during that time.”

Mr. Schmid added that he sees more of a return to “normal, historical volumes” in Q4, with a number of portfolio deals and recapitalizations taking place.

Cap rates have remained fairly steady so far in 2019, averaging about 6.4 percent for all deals, with portfolio transactions garnering a premium with an average cap rate of 5.9 percent.

Revista’s update and webcast included plenty of additional information and data about the MOB sector, including:

■ Demand remains very strong from a wide array of investors for MOBs nationwide, but particularly in the top 100 and top 50 markets, where cap rates have averaged 6.4 percent. Through Q3, MOB transactions have totaled $9.71 billion on a TTM basis in the top 100 markets, with Los Angeles leading the way with $818.9 million of volume and New York coming in at $755.9 million during that time. Los Angeles has had the lowest average cap rate in the trailing 12-month period at 5.5 percent, while Houston came in with the second lowest at 5.7 percent. “This sector has outperformed other types of commercial and residential real estate, and investor have gravitated toward stable cash yields and well-occupied buildings,” Mr. Schmid noted. “And like you said Hilda, the average deal in this sector is about $15 million to $20 million, and what that amounts to is a lot of capital chasing a lot of small transactions.”

■ The national occupancy rate for MOBs remains strong at 91.3 percent, which is basically the same, or close to, what it has been for the past nine quarters, according to Revista data. One of the reasons behind that steady performance is the strong absorption rate, which totaled 16.7 million square feet in Q3 on a trailing 12-month (TTM) basis. This absorption rate is the result of new MOB developments that were substantially pre-leased and delivered with high occupancies. “We’re just not seeing many tenants leave as a result of COVID,” said Mr. Ochs.

■ The market with the highest average triple-net MOB rents is Los Angeles, where the average PSF was $31.24 as of Q3. The next most-expensive market for MOB rents was Washington, D.C., with an average of $25.70 PSF, followed by New York at $24.60 PSF.

■ MOB construction remains strong. While Q2 and the start of the pandemic saw a slight slowdown in the number of projects started, Ms. Martin said there had already been a bit of a “pull back” at the beginning of 2020 after a strong finish to 2019. According to Revista data, 24.4 million square feet of MOB projects were started in Q3 on a trailing 12-month basis, with the amount of square footage underway during the quarter standing at 43 million, up from 41 million in Q2. Revista data also indicates the country is home to about 36,000 MOBs with a total of about 1.5 billion square feet of space. This typically grows by about 1.5 percent annually. “We saw several projects delayed in Q2, but those were mostly with lower-credit rated health systems,” Mr. Ochs said. “One has to remember that MOB projects are strategically purpose-built, and take a long time to bring to market as they are very carefully thought through from a programming of services perspective.”

■ Employment in the ambulatory sector, which includes people working in MOB, surgery centers and other outpatient facilities, fell a whopping 17 percent from February to April, during a time when elective surgeries and procedures were shut down in most states. Since then, however, with most states opening up such procedures, employment in the ambulatory sector has nearly recovered all of those job losses, increasing by about a million jobs, or 16 percent, from April to September.

■ The use of telehealth, while still considered important now and for the future, is not likely to cut into the need for clinical space. According to data from Epic Health Research Network, the use of telehealth, or virtual doctor visits, accounted for about 70 percent of all outpatient visits in the early weeks of the pandemic. However, since then the trend has been reversed, with virtual doctor visits accounting for about 21 percent of all outpatient visits through July, according to Mr. Hargrave. Mr. Ochs noted, that “telehealth has played an important role during this time, and there are a lot of aspects of it that are here to stay.” He added that an oncologist told him that one of his patients, for example, has been able to avoid driving more than two hours for monthly follow-up visits. “But in other cases, in-person reviews with a doctor are necessary,” Mr. Ochs noted.

■ More and more investors as well as healthcare providers are preferring to invest in, or practice in, settings that are off-campus and away from urban cores, such as in suburban or tertiary markets. “It’s well-known that demand for health services moving to the suburbs and other markets,” Mr. Schmid said. “Healthcare services growth is chasing the rooftops and its mostly about wellness and keeping people healthy in order to avoid complications and more expensive (treatments) later on.”