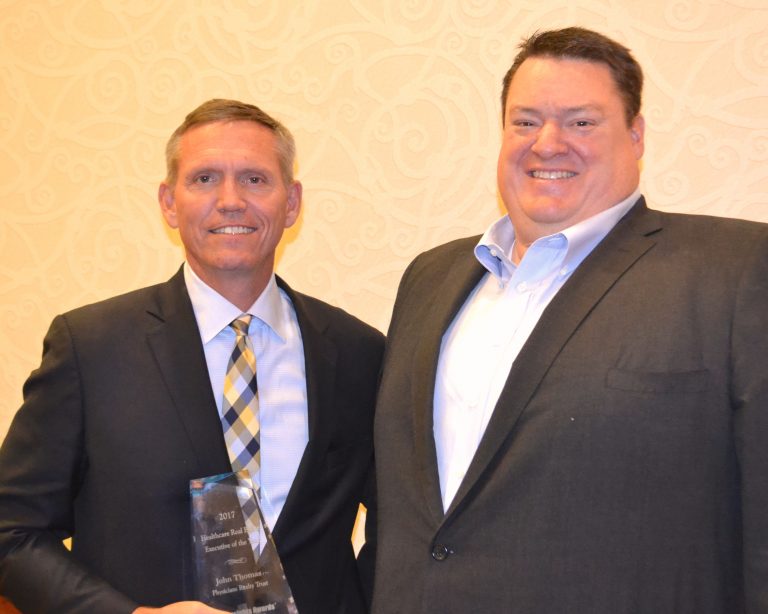 John Thomas (left) received his HREI Insights Awards™ Healthcare Real Estate Executive of the Year Award at the RealShare conference in Scottsdale, Ariz., in December. He is pictured above with the 2015 winner, Erik Tellefson of Capital One. (HREI photo)

The launching of Milwaukee-based Physicians Realty Trust (NYSE: DOC) took place rather quietly back in 2013, as the real estate investment trust (REIT) commenced with an initial portfolio of 19 medical office buildings (MOBs) valued at about $125 million.

The properties were acquired and/or developed through funds managed by B.C. Ziegler & Co., another Milwaukee firm. It was Ziegler’s John Sweet, along with Mark Theine, who decided to launch DOC as a publicly traded REIT, as they saw the potential to grow such an investment vehicle in an industry, healthcare, that was poised for explosive growth itself.

To lead the new REIT as president and CEO, Mr. Sweet called on a longtime business acquaintance with plenty of experience managing and growing an MOB portfolio: John T. Thomas, who until 2012 had overseen the Medical Facilities Group with Toledo, Ohio-based Health Care REIT, now Welltower Inc. (NYSE: HCN).

Looks like Mr. Sweet made the right choice, as under Mr. Thomas’s leadership DOC has grown the value of its portfolio by nearly 16-fold since its founding, propelling Physicians Realty Trust to become one of the best-known, and according to numerous sector professionals, most highly respected, MOB investors in the business.

As a result, Mr. Thomas was named the 2017 HREI™ Insights Award™ Executive of the Year, as voted upon by the HREI™ Editorial Advisory Board.

“I was just fortunate that John Sweet invited me to be CEO, to help him and Mark Theine take it public in 2013,” recalls Mr. Thomas, who has a background as an attorney and has worked for a few health systems over the years, including Baylor Health Care System in Dallas. Mr. Sweet is now on the board of directors of Wheeler Real Estate Investment Trust (Nasdaq: WHLR), while Mr. Theine is DOC’s senior VP of asset and investment management.

“With Tommy Thompson (former Wisconsin governor) joining us to serve as chairman of the board, we hit the ground running with the $125 million or so in assets that John and Mark had put together; we then had a successful upsized IPO (initial public offering) and were off and running.”

Were they ever. Today, DOC’s portfolio of mostly MOBs is valued at more than $4 billion based on purchase price. As of the end of the third quarter (Q3) 2017, the 13 million square foot, 270-building portfolio was about 96 percent occupied.

According to Mr. Thomas, DOC’s success has been built through a combination of execution, integrity and relationships, with “the ‘secret sauce’ being our relationship model of investing.

“We work diligently to meet the needs of our provider clients, especially those who sell us facilities that they occupy. We don’t just have a lease with them, we have a ‘partnership.’”

Since its founding, DOC’s executives have reached out to clients and acquaintances that they’d made over the years in sourcing potential purchases. It’s also made sure to follow up on promises made during closings.

For example, DOC closed on the largest health system sale, or monetization, of MOBs in 2016, the $700 million acquisition of 50 facilities from, Englewood, Colo.-based CHI. Then the health system followed up by selling 13 more assets to the REIT for $157.1 million in 2017. That came after DOC made numerous improvements in certain MOBs and increased their occupancies.

In addition, DOC’s numerous relationships in the sector led to several purchases in 2017 of assets that were slated to be part of other large transactions. In a number of those deals, health systems acquired certain facilities prior to scheduled, larger sales to other investors by exercising rights of first refusal (ROFRs) clauses. They then sold the assets to DOC, which made well over $500 million worth of such acquisitions in 2017.

With relationships driving so many of its acquisitions in 2017, DOC greatly underestimated how much it would invest during the year. After setting its guidance at $800 million to $1 billion, DOC made $1.4 billion worth of purchases.

In closing a recent interview, Mr. Thomas was asked what he considers his best attribute as a leader.

“I guess I would say that it has to do with listening and caring about the people we work with, whether the person is a client, a member of the DOC team, a patient visiting our building, or our investors,” he answered. “I like to hear from everyone how we can be better.”