Back in February 2013, we at Healthcare Real Estate Insights™ published an article declaring that 2012 was the best year on record for medical office building (MOB) sales, as total volume topped $6 billion. As always, we used data compiled by commercial real estate research firm Real Capital Analytics (RCA) Inc. The next line of the story was: “Now what?” As in, “Can MOB sales go any higher?”

Investors answered that question loud and clear during the past two years as the nation’s MOB sales volume continued to increase. In recent years, revised data found that 2006 was actually the previous peak, with more than $6.6 billion in MOB sales – even better than 2012. But no matter. Last year surpassed both marks with ease, with an astounding $8.45 billion in total sales volume. That was up 27 percent over 2013, when the final yearly volume was a near-record $6.57 billion. (All of this RCA data is based on single-asset or portfolio transactions of at least $5 million.)

The average price per square foot (PSF) for MOB deals of more than $5 million in 2014 was $231. For the first three quarters of the year, the trailing 12-month average PSF hovered around $240, meaning Q4 saw a bit of a drop in the average PSF. 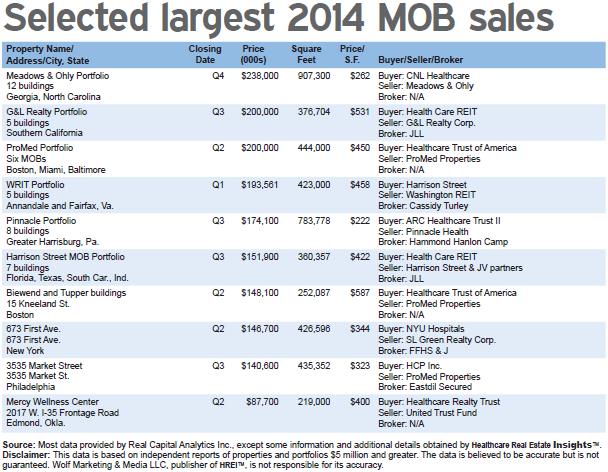 Why are MOB sales taking place at such a rapid pace, steadily increasing year to year since the Great Recession subsided? The obvious answer is demand, which keeps growing from a wide variety of investor types, including large institutions and others new to healthcare real estate (HRE).

But there’s much more to it than that. To explore that dynamic in more depth, let’s go back to 2012 for a moment and revisit the question that was asked at that time: “Now what?”

As you might recall, 2012 ended on an incredible high note as MOB owners were prompted to sell their real estate assets in order to reap the rewards of capital gains tax benefits that were sunsetting at year’s end. At the time, many sector professionals were predicting that 2013 would be a good year, but that owners who did not take advantage of the tax benefits would not be as willing to offer their properties in 2013 and beyond.

Were they ever wrong.

Little did they know that because interest rates as well as investment yields would remain quite low during the next couple of years that investors would continue to scour the market for MOBs, which have, for the most part, been providing stronger returns than other investment vehicles.

This is true even though MOB pricing is at, or near, all-time highs, as evidenced by trends in the average capitalization (cap) rate, or first-year return on the investment. In general, the lower the cap rate, the higher the price per square foot.

According to RCA, the average MOB cap for 2014 was 7.1 percent. Most professionals involved in MOB sales report that cap rates for high-quality, health system-affiliated properties – which are generally seen as the most desirable – can garner much lower cap rates (and higher pricing) of anywhere from 7 percent all the way down to just under 6 percent.

As a result of such strong demand, MOB owners are being enticed by the resulting high pricing to sell their MOBs as a way of funding future business endeavors, providing strong returns to their investors, or any number of other reasons.

This is why a number of large portfolio deals – nine that exceeded $140 million – made the top sales of 2014 chart on the opposite page. For the most part, these transactions involved MOB owners selling assets to take advantage of strong pricing. The sellers included long-time developers such as Atlanta-based Meadows & Ohly.

Meadows & Ohly’s Van Fletcher, VP and principal, noted in an interview that not only was the timing right to sell the assets – with pricing at or near all-time record highs for healthcare real estate – but that “it was the right thing to do for our co-investors in those projects.”

“In addition,” he adds, “we felt the use of a portfolio approach would increase the market attention given to each project.” He said the firm has ample capital to fund new projects. The sale was primarily driven by the opportunity to maximize the price the firm could achieve for its investors.

Large hospital-driven MOB monetizations were rare in 2014, with only one of the top 10 deals involving a sale by a health system. PinnacleHealth monetized a eight-building portfolio in the in Harrisburg, Pa., with Hammond Hanlon Camp (H2C) representing the seller.

But H2C Principal Philip J. “PJ” Camp says his firm is talking to a number of health systems that are intrigued by the possibility of selling MOBs or other facilities.

And John Smelter, senior director of HRE for Marcus & Millichap, said at that meeting that barring any unforeseen disruption to the economy, or an unpredicted and substantial boost to interest rates, he foresees the sales market staying strong for some time.

As Mr. Smelter noted in the article “Demand to continue well into 2015” on Page 4 of this edition, “Fasten your seat belt and hang on for the ride because it’s not even close to being over in my opinion.” 