Event enjoyed near-record attendance and high marks for content, networking MINNEAPOLIS – It is our understanding that the seeds of the BOMA International Medical Office Buildings + Healthcare Real Estate Conference were planted in 2003. That’s when a “Medical Office Buildings Seminar” was offered as part of the annual BOMA International Annual Conference and The […]

Despite some potential headwinds for MOB construction, all signs, including the opinions of HRE professionals and data from research firms such as Revista, indicate strong results now and in the future By John B. Mugford During the boom years for medical office building (MOB) development prior to the Great Recession, financing was easy to get […]

Special Report: Largest MOB sales of the past decade

Are MOBs an endangered species? PROBABLY NOT, BUT PANELISTS SAY DESIGN, FINANCING, OWNERSHIP WILL CHANGE By Murray W. Wolf Will medical office buildings (MOBs) go the way of the rotary phone? Perhaps that is an exaggeration. But the way MOBs are designed, financed and owned is already changing, according to a panel of healthcare providers […]

ASSET VALUATIONS HAVE SLIPPED SINCE ‘07, BUT NIC PANEL SEES IMPROVEMENT By Murray W. Wolf In this, our third article from the NIC conference, we explore trends in valuations for senior living real estate. The market for senior living facilities peaked in 2006-07. Both the total dollar volume and number of transactions achieved new highs […] 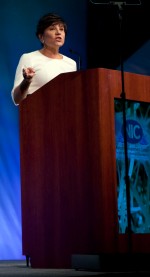 DEVELOPMENT AND OCCUPANCY RATES HAVE DIPPED, BUT NIC CROWD SEES HOPE By Murray W. Wolf Like medical office, senior living has weathered the recession better than most commercial real estate sectors. But the similarities don’t stop there. Both are healthcare-related businesses that face risks from possible reimbursement rate reductions and continue to struggle to do […]

WHAT CONSTITUTES A ‘GOOD’ DEAL IN THIS MARKET? By Murray W. Wolf In this difficult economy, deal-hungry healthcare real estate developers and investors might be tempted to consider just about any opportunity that comes down the pike. But that makes it all the more important for them to remain objective and disciplined, and to temper […]