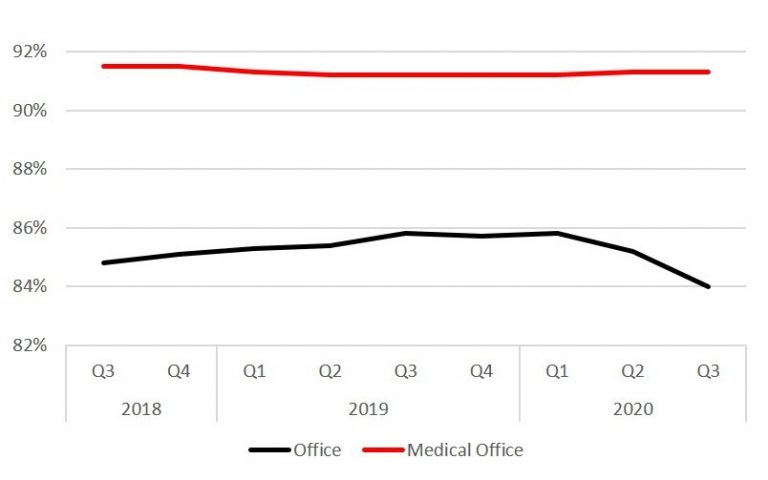 Key points:
• JLL’s recently-released third-quarter 2020 U.S. office research affirms the MOB investment thesis by displaying its comparative resilience in the face of the pandemic. Medical office occupancy has consistently led the broad office category by roughly 600 basis points (91.5% vs 85.5% on average) in the two years prior to COVID. Each segment experienced healthy and consistent occupancy during this period. However, by the third quarter 2020 in the face of major economic disruption, office occupancy declined sharply and the sector differential in occupancy widened to 700 basis points, as MOB occupancy barely moved. The divergence in performance reflects the high level of confidence in demand for medical services that is not easily affected by economic trends.
• Stable, steady demand has allowed medical office occupancy to remain in a consistent, tight band above 91% for many years, dating back to before the financial crisis in 2008. Economic factors play a subsidiary role against a growing and aging population driving demand for healthcare services. As a case in point, 24 million square feet of new medical office product has entered the market over the past 12 months, largely pre-leased with limited speculative space, barely budging overall occupancy statistics. By contrast, the office sector has shed 42.3 million square feet of occupancy in the third quarter alone.
• A comparison of changes in rent levels further illustrates the demand driver divergence between office and medical office. Net effective rents for new office leases dropped by 18.3% in the third quarter nationally. At the same time, Revista noted that third quarter MOB rents in the Top 50 Metros remained steady at $22.28 p.s.f., representing a slight uptick. While MOB rents are under pressure from healthcare providers, tenants are renewing in-place at much higher levels during the pandemic, albeit with shorter commitment terms to maximize flexibility. The relative lack of requests for rent relief supported in part by PPP loans from the CARES Act has sustained contractual rent increases for in-place leases. The lack of erosion in MOB rents is a continued validation of the investment case for real estate investors seeking stable and durable income.