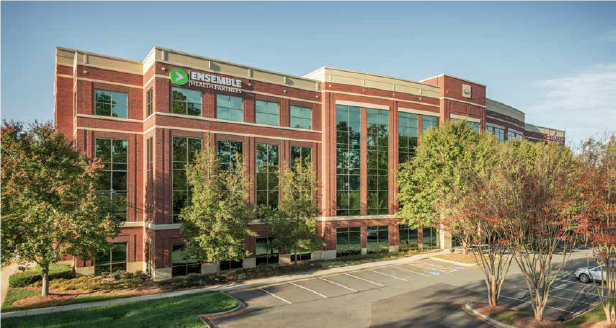 One of the buildings HTA acquired was The Alexander Building, a 128,510 square foot MOB in Huntersville, N.C. (Photo courtesy of JLL)

The new owner hasn’t commented yet, but it would appear that a freshly acquired “office with medical” portfolio near Charlotte, N.C., might be ripe for a conversion to 100 percent medical.

That would seem to be a reasonable possibility given the identity of the buyer: Scottsdale, Ariz.-based Healthcare Trust of America (NYSE: HTA).
The publicly traded REIT, which is one of the largest owners of medical office buildings (MOBs) in the country with a portfolio of about 24 million square feet of space, recently closed on the purchase of five office buildings, some with medical tenants, in Huntersville, N.C., a northern suburb of Charlotte, for $81.5 million.
Healthcare Real Estate Insights first learned of the transaction through information from healthcare real estate (HRE) research firm Revista, which included two of the buildings in its recent MOB sales transaction data. The other office buildings were not included, according to Revista officials, because they did not include medical tenancy.
An article in the Charlotte Business Journal on Dec. 10 indicates that the five buildings have a total of 395,796 square feet of space, putting the price per square foot (PSF) at about $205. The seller, according to both Revista and the Business Journal, was Atlanta-based OA Development, which in its more than two decades of existence has developed and/or acquired more than 3 million square feet of commercial properties for a total of about $325 million.
OA Development acquired the five-building portfolio in early 2018 for $62.5 million. The facilities were developed between 1990 and 2001.
The two buildings listed in Revista’s data, which the research firm refers to as “office with medical” facilities, are just off U.S. Interstate 77 and comprise the following:
■ The Reed Building, a 106,565 square foot facility at 9920 Kincey Ave. Completed in 1998, the MOB is across the street from the 139-bed Novant Health Huntersville Medical Center, part of the four-state, 15-hospital Charlotte, N.C.-based Novant Health. Tenants include a dialysis center operated by Charlotte-based Independent Nephrology Services.
■ The Alexander Building, a 128,510 square foot MOB at 13620 Reese Blvd., which is just a mile south of the Reed Building. Tenants in the facility, which was constructed in 2001, include North Charlotte Plastic Surgery Associates and North Charlotte Plastic Surgery.
All of the buildings in the portfolio, including the three other non-medical facilities, are in what is known as the Park-Huntersville mixed-use development, which is close to the Novant hospital and is just west of the Gilead Road exit off I-77. The overall development includes 2.6 million square feet of space under numerous ownerships.
In a statement from OA Development included in the Business Journal article, Brian Granath, a partner, said: “Our original pro forma had us holding this asset for several more years, but we reached an inflection point in the leasing cycle where we thought it was time to test the market. Healthcare Trust saw the value of the asset, given its healthy fundamentals, including its location within The Park and the north Charlotte submarket.”
For HTA, which prefers to focus its acquisition and ownership activities to major markets in order to achieve property and asset management scale and efficiencies, the purchase adds to its large holdings in Greater Charlotte.
Prior to the recent acquisition, the REIT, which owns more than 500,000 square feet of MOB space in 15 markets nationwide, owned a portfolio of more than 400,000 square feet in Greater Charlotte, Robert Milligan, chief financial officer, reported during a second quarter (Q2) 2019 earnings call with analysts.
The latest acquisition would bring that total to about 800,000 square feet of space.
Whether HTA intends to convert the entire portfolio to medical remains to be seen. HTA officials had not responded to an inquiry from HREI by the time this article went to press.
For more information, please visit RevistaMed.com. For the Charlotte Business Journal article, please visit BizJournals.com. (Both websites require a subscription.)