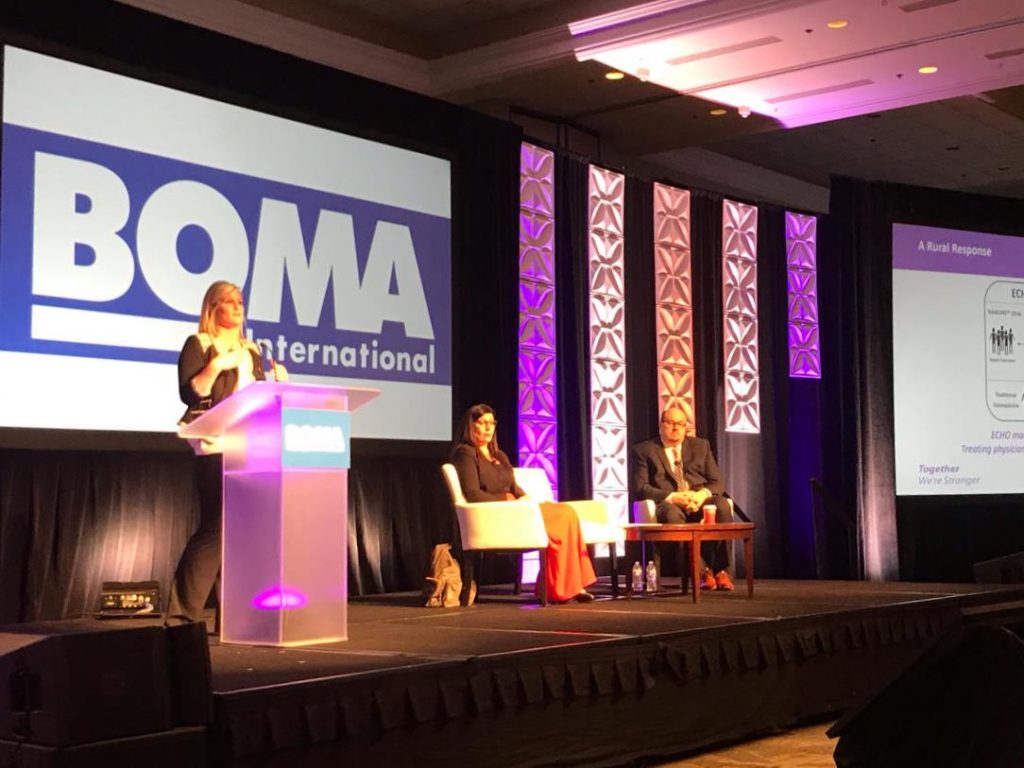 BOMA MOB conference Co-Chair Courtney Nelson of CHI said that a keynote on how one community is battling the opioid crisis was one of the most talked about sessions. (Photo courtesy of Chris Bodnar)

MINNEAPOLIS – It is our understanding that the seeds of the BOMA International Medical Office Buildings + Healthcare Real Estate Conference were planted in 2003. That’s when a “Medical Office Buildings Seminar” was offered as part of the annual BOMA International Annual Conference and The Office Building Show, held June 28 to July 1 of that year in San Francisco. (But it could have been even before that for all we know. Healthcare Real Estate Insights™ first attended the BOMA MOB event 2006.)

The handful of those in the healthcare real estate (HRE) space who say they attended that nascent San Francisco event almost 16 years ago tell HREI™ that there were perhaps only a few dozen professionals in attendance. (We found one old news report online that estimated the “crowd” at about 150, but we can’t confirm that.)

Likewise, it wasn’t that long ago that the annual MOB event simply piggybacked on “Big BOMA” before being established as a separate conference that drew about 600 attendees during its inaugural year of 2010 in Chicago.

Well, attendance was more than twice that when the most recent BOMA MOB conference concluded last Friday, May 3, in Minneapolis. A near-record 1,306 registrants had been in attendance for three days of keynote presentations, 20-plus panel sessions covering a wide array of HRE topics, networking, deal making, cocktail receptions, and dinner parties.

While the attendance figure came up just a few people short of the record set in Houston last year, with 1,316 conference-goers, this year’s conference received high marks, according to those who helped organize it and talked with HREI™.

“There might be some people who think BOMA MOB has gotten too big,” Jake Dinnen, senior VP of development with San Diego-based PMB, a long-time sector developer, owner and manager, said after the conclusion. “But I’ve got to say that with all of these people and companies attending, the networking just keeps getting better and better. We arranged lots of meetings this week that are going to result in business for us. That’s very valuable for any company.”

“We had some great meetings,” Mr. Camp told HREI™ after the final session. “We met with some people from REITs, developer/investors and health systems who are going to look to us for some advisory help, which is what we do. So, in that respect, the BOMA conference really can be beneficial.”

“I’ve heard from many people that this was one of the highest-energy and best BOMA MOB conferences they’ve attended,” Ms. Nelson tells HREI™. “We took a hard look at programming and added new volunteers, new track leaders and had many new faces on panels each day.”

She says many attendees provided positive feedback on one keynote presentation in particular: the battle being waged, and won, by CHI St. Gabriel Hospital in Little Falls, Minn., against the opioid crisis.

“Adding this to our lineup was something we felt very strongly about, given its impact on the United States and how it does not discriminate by race, geography or socioeconomic status,” she said.

Mr. Bodnar says he also received strong feedback about the content and the networking opportunities.

If there was an overall theme to the conference, Mr. Bodnar notes it was that “the capital markets have opened up and companies are very active right now, whether it’s in development or investing. At the same time, the health systems continue to look for ways to expand their networks, all of which is resulting in a very active healthcare real estate environment in 2019.”

Next year’s BOMA MOB conference will be held April 29 to May 1 in San Diego. ❒