Feature Story: When is the downturn coming?

At Revista conference, well-known economist looks at the future 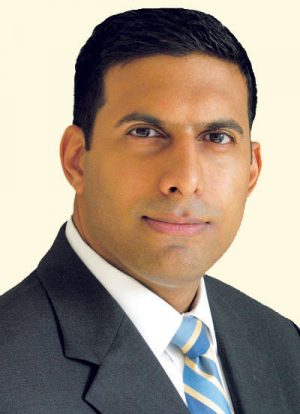 SAN DIEGO – We’d all love to know whether the U.S. economy is headed for a recession later in 2019, or perhaps in 2020. We’d also like to know exactly when such a downturn will happen, how long it will last, how mild or drastic it might be, and whether we should continue to make investments or hold off on doing so.

Even for those active in the HRE sector — which is considered a safe haven during economic downturns, often being referred to as a “recession-resistant” asset class – such information would come in awfully handy.

Of course, there are those who will make such predictions. Unfortunately, we won’t know who is right until the next downturn actually does come to pass – or doesn’t.

But that doesn’t mean we can’t gather some thoughtful insights about where the economy might be headed. At the Revista Medical Real Estate Investment Forum 2019 in San Diego Feb. 7, noted real estate economist Dr. Sam Chandan, provided just that, examining the possibility of a downturn later this year or next, and put into context what it might mean for those involved in CRE and HRE.

During his presentation, titled “Outlook for the U.S. Economy & Commercial Real Estate,” Dr. Chandan noted that most “economists are always loath to try and put any kind of expectations on an impending recession, which means that we have to read between the lines, whether it’s expectations on how the economy will perform or the response to the Wall Street Journal’s (WSJ) forecasts of survey economists.”

Dr. Chandan noted that the most recent Wall Street Journal survey concerning a potential recession, based on New York Federal Reserve forecast models, puts the likelihood of a downturn in about the mid-20 percent range for the next 12 months.

That’s the highest figure since 2007, prior to the Great Recession, when the Wall Street Journal survey put the likelihood of a recession at more than 40 percent.

Dr. Chandan added, however, that while an economic downturn could affect many industries, including CRE, “I think, in medical office, we certainly have the demographics working in our favor.”

“When reading between the lines, what we’re really looking at is that folks are signaling real concerns about the potential for a slowdown or a contracting of the economy by giving us numbers that suggest the economy will perform in a way that is significantly weaker than what we’ve seen,” he continued.

“There are (aspects of) the macroeconomic environment that are certainly strong, supported by a strong labor market, but there are also indications that there are potential signs of weakness. That there are areas of the economy, levels of debt, there are asset markets, not real estate per se, that we have to keep an eye on to be able to act defensively when we reach that point or advance that point where the economy does begin to weaken for some short or moderate period of time.”

He noted that while the United States has experienced gross domestic product (GDP) growth of about 2.2 percent annually over the last five years, that is expected to drop to below 2 percent in the next five years, according to the International Monetary Fund. That drop, however, is about in keeping with expected GDP drops in China, the European Union and other advanced economies.

The GDP for the global economy as well as emerging and developing economies, however, is expected to increase slightly.

Although real estate is not likely to be the cause of the next recession – the over-heated housing market was a major reason for the last downturn, he noted – “we’ll just have to anticipate the need to continue to think defensively, because even if we’re not the cause, there will be some pain measure in commercial real estate that we’ll have to be prepared for.”

So, what does the potential for a recession mean to those involved in CRE and the HRE sector?

He noted that bank lending standards are expected to tighten in 2019, according to a Federal Reserve survey of senior lending officers, adding that, “at the end of the day, what the indicators are telling us is we need to be careful, we need to be thoughtful, we need to be cautious in making plans that are very much forward-looking.”

“Is that to say that we should step away from next deal opportunity?” he asked. “Not at all. For those of us who have been in the market for more than one cycle we know that the best time to do a deal is when the market is not performing, when our counterparts have not have had that success or may not have access to debt. If we have preferential access to debt, it presents a perfect time to get in.

“But over the next couple of years we do need to have positioned our portfolios in a way that anticipates the real possibility that the economy will weaken. I don’t know if it will be in the next 12 months or not.”

Dr. Chandan noted that investors, lenders and others involved in CRE do not need to be “able to time things exactly, we need to know that the investments we’re making today are going to be impacted by the economic cycle. That is almost a certainty at this point.”

While investors should be somewhat cautious and defensive in their strategies, most are feeling “sanguine,” or somewhat optimistic during a time of potential difficulty, about the prospects for lending and investing in CRE in the next two years, “which look pretty good irrespective of what happens to the economy.”