Feature Story: Steadiness of the MOB sector is the exciting news 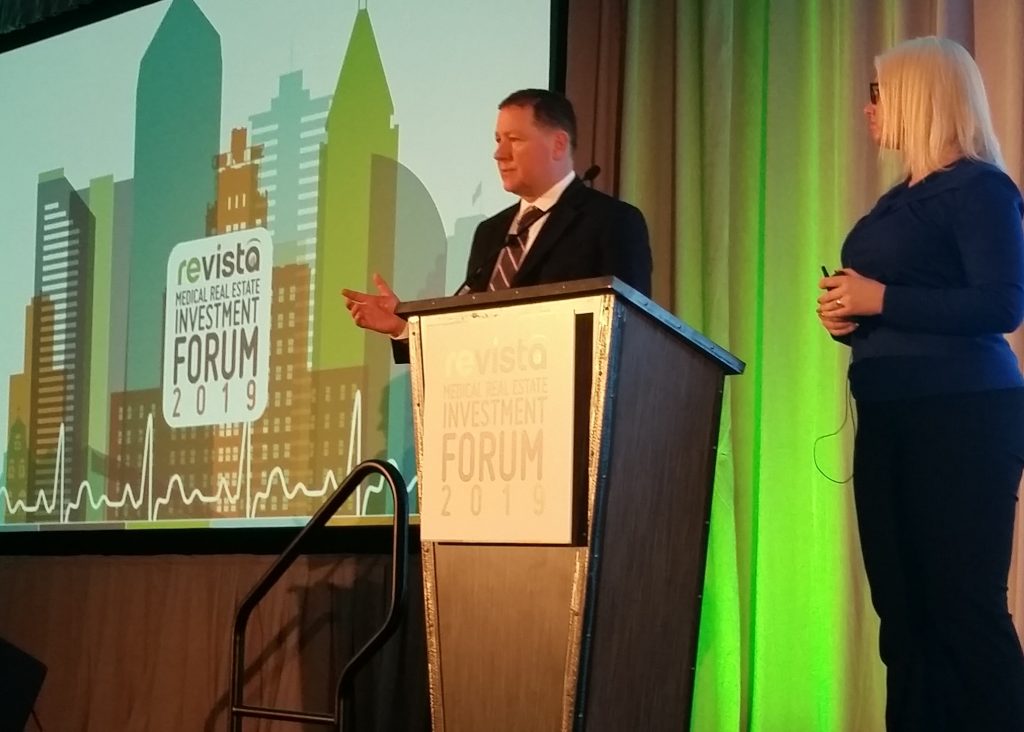 SAN DIEGO – As a slide appeared on the big screens during a conference in San Diego last week hosted by healthcare real estate (HRE) research firm Revista, Mike Hargrave, a principal with the company, said, “I would imagine this is why we’re all here.”

The slide showed that the average, nationwide same-store net operating income (NOI) growth for medical office buildings (MOBs) stood at 2.4 percent in the third quarter (Q3) of 2018. The figure represented a slight decrease from recent quarters, when the average NOI growth peaked at 3 percent during a handful of quarters in 2016-17.

However, Mr. Hargrave noted, “NOI growth for MOBs remains remarkably consistent over the years, ranging from between 2 percent and 3 percent year after year, even coming out of the Great Recession.”

Their presentation, “Medical Real Estate Industry Update,” was rife with rich data highlighting MOB fundamentals, such as occupancy rates, investment sales trends, development and construction numbers and other interesting information, such as a recent spike in hospital construction.

Although same-store NOI growth for MOBs was down slightly in 2018, Mr. Hargrave attributed the slight decrease to a small drop in the average occupancy rate nationwide, which stood at 92 percent in Q3 2018. The rate has fallen steadily from a peak of 92.6 percent in Q4 2016.

“Even with the slight drop, occupancy rates for MOBs has been remarkably stable over the years, basically ranging from 91 percent to 93 percent over the last 10 years,” he said.

When it comes to MOB sales volume, Revista’s figures for 2018, still preliminary at this point, saw $11.2 billion of transactions. Mr. Hargrave pointed out that although last year’s total was less than the record-breaking $15.8 billion in 2017, it was fairly typically of the past four years.

“Prior to 2014, when sales were $8.9 billion, he yearly totals were about $5 billion,” Mr. Hargrave noted. “But since 2015, the volume has topped $11 billion each year, meaning about 3 percent of the total inventory traded. That’s in line with other commercial real estate sectors and bodes well for the future of transactions in this industry.”

Mr. Hargrave said that while private equity capital sources dominated MOB investment activity in 2018, accounting for 67 percent of MOB purchases – health systems accounted for 11 percent, while real estate investment trusts (REITs) made 20 percent of the acquisitions – that changed as the year came to a close. In Q4, the REITs rebounded and accounted for 41 percent of MOB sales.

“Private equity really had a stranglehold on the market in late 2017 and early 2018,” he said. “And that’s because as interest rates were rising, they were able to acquire properties for their core funds with very low leverage, sometimes making all-cash purchases. But the REITs, particularly Welltower (NYSE: WELL), came off the sidelines and got aggressive once again.”

Interestingly, Revista’s data indicates that the rise in cap rates is being fueled by transactions involving what the firm considers “non-core” assets. For those sales, the average cap rate has risen from a low of 6.4 percent in Q3 2017 to 7.1 percent in Q4 2018.

On the other hand, cap rates for the top properties, considered by Revista to be “core” MOBs, cap rates have hovered right around 5.5 percent since Q2 2017.

Revista’s data also indicates that 874 HRE properties, with a value of about $70 billion were under construction as of the end of 2018. That includes a variety of project types, including MOBs, hospitals and others.

Mr. Hargrave noted that about 21 million square feet of new MOB space, with a value of about $9.4 billion, is slated for completion in 2019, about the same as in 2018.

As Revista’s data points out, more and more MOB projects are moving off campus. In 2019, about 69 percent of the new MOB space developed will be in off-campus locations, reflecting a steady increase from the 43 percent recorded in 2012.

“This is the story that we’ve been talking about year after year, the retailization of healthcare delivery and the need of the health systems to get out into the communities,” Ms. Martin said.

Hospital construction, on the other hand, will see a large increase in projects, square footage and dollar value in 2019. Revista’s data shows that 39.3 million square feet of hospital space, be it in new facilities, replacement projects or expansions, with a value of about $28 billion, are scheduled to be delivered in 2019, making strong increases from recent years, including a 72 percent increase in square footage over 2017.

“All of these new hospital projects are, as we all know, contradictory to the recent conversation that the country needs fewer hospitals and fewer beds as the shift to an outpatient model continues,” said Ms. Martin. “So why is this happening? Well, one has to remember that the typical hospital project takes 731 days to complete from the groundbreaking to the completion. So, many of these were planned in 2014-15, in the early days of the ACA (Affordable Care Act), and there was a need to meet the demands of an aging demographic, a need to add new technology and a need to recruit more talent with new and better spaces.”

California, with its seismic safety requirements for hospitals fueling much of the construction spree, leads the country with 71 hospital projects under construction, Ms. Martin said.