Cover Story: ‘Constellations’ are the key to success 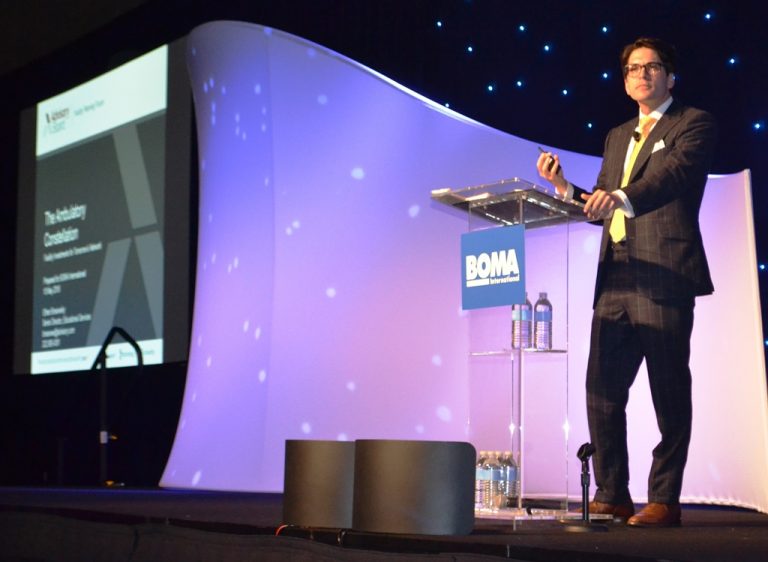 Ever since humans first looked to the night sky, they have found and used patterns, or constellations, among the stars to help them survive.

“Individual stars are beautiful, and are bright, but are not really useful to us as humans,” Ethan Brosowsky, senior director of educational services with The Advisory Board Company, told a keynote crowd during BOMA International’s 2018 Medical Office Building + Healthcare Real Estate Conference May 9-11 in Houston.

“What is useful to us are the connections between the stars,” he continued. “All three modern societies independently created constellations, and they were absolutely important, creating … recognizable patterns to navigate, to mark the seasons, to know what plants to crop, to survive. Our existence as a species relied on our ability to read the stars and meant the different between life and death.”

Mr. Brosowsky then made his “grand” comparison, noting that in today’s healthcare environment, with reimbursements dwindling and consumers are demanding conveniently located care, the country’s hospital operators and health systems need to form strong, inter-connected ambulatory networks – or, one might say, constellations – in order to survive. His presentation was titled, “The Ambulatory Constellation: Facility Investments for Tomorrow’s Network.”

“Today, every health system needs to evolve from a connection of these independent, sometimes bright and wonderful and useful and independent stars into a collection of points that is organized, that is interconnected, that is networked and is visible and easily recognizable to their consumers,” said Mr. Brosowsky, whose Washington-based research, technology and consulting firm provides services, information and advice to more than 4,400 hospitals and health systems nationwide.

“These sites of care need to be located, planned and designed in a way that maximizes inter-connectiveness,” he said.

Although the healthcare delivery model has experienced a dramatic shift in recent years from inpatient to outpatient care – a shift that has been accelerated by the passage of the Patient Protection and Affordable Care Act (PPACA) – this shift is continuing and is currently “full steam ahead,” according to Mr. Brosowsky.

Yet, Mr. Brosowsky said, “most health systems haven’t really been making the right investments to cultivate their ambulatory networks. Either they are investing in the wrong assets or can’t make the assets work together as a network.”

During his keynote address at the BOMA MOB conference, which saw a record-breaking 1,315 attendees, Mr. Brosowsky explored how health systems should build out their ambulatory networks, what facilities they are likely to rely on in doing so and how third-party facility partners can help them achieve their goals.

Not only has more care been shifted to outpatient facilities in recent years, but The Advisory Board’s 10-year projection for the future shows that “outpatient growth outstrips inpatient growth for every service line of every hospital,” Mr. Brosowsky said.

Because of this, surveys conducted by The Advisory Board indicate that nearly 60 percent of respondents say their planned construction projects entail outpatient facilities. More than 92 percent of respondents indicated they plan to build a new medical office building (MOB), ambulatory surgery center (ASC) or urgent care facility during the next two years or so.

“But you have to remember the title of this presentation,” Mr. Brosowsky told the crowd. “Providers cannot just invest in construction of one site or another, it has to be about creating the network, the constellation.”

As health systems look to build out, expand or improve their ambulatory networks, five facility types will mostly likely be part of the growth: