Feature Story: Inside the biggest monetization ever 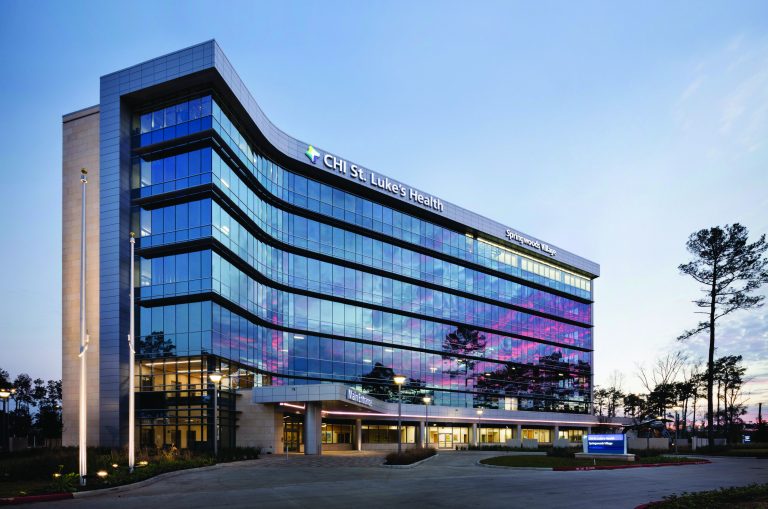 One of things Physicians Realty Trust (DocREIT) brought to the Catholic Health Initiatives (CHI) transaction was an ability to lease space, provide capital for improvements and add value. For example, the CHI – St. Luke’s Springwoods Village MOB (above) near Houston was only half filled at the time of the closing, but DocREIT came up with a way to complete tenant improvements and bring in a local physician group as a major tenant. (Photo courtesy of Physicians Realty Trust)

Much has already been said and written about last year’s largest medical office building (MOB) portfolio monetization – which is also said to be the largest ever. The headline-grabbing sale had Englewood, Colo.-based Catholic Health Initiatives (CHI) selling 51 MOBs with a total of 3.1 million square feet for $700 million to Milwaukee-based Physicians Realty Trust (NYSE: DOC), also known as DocREIT, one of the most prolific MOB buyers since its founding four years ago.

Yet, despite all the news media coverage regarding what is believed to be the largest health system monetization, or sale, of outpatient facilities in the history of the healthcare real estate (HRE) sector, there was certainly many of lesser known, behind-the-scenes aspects of the deal. They include lots of due diligence, preparations, decisions, strategic discussions and myriad other details, including the inadvertent sending of a “reply all” email, that were not necessarily widely reported.

Even though the deal took place in two tranches in mid- to late-2016, the CHI-DocREIT transaction was still a relevant topic during BOMA International’s 2017 MOBs & HRE Conference in Denver, held May 10-12 at the Hyatt Regency. The 1,240 registered attendees broke the BOMA MOB conference record – an indication, many professionals in the sector have said, that interest in HRE continues to escalate.

Following a few events on May 10, including a keynote speech on the country’s age demographics by Paul Taylor, a senior fellow at the Pew Research Center in Washington, D.C., the panel session concerning the CHI monetization led off the day’s events on May 11.

“It’s a topic that gets discussed a lot, especially from a philosophical standpoint,” the panel’s moderator, Christopher “Chris” Bodnar, an executive VP with CBRE Group Inc. (NYSE: CBG) and the co-leader of the company’s national Healthcare Capital Markets Group, told the attendees in the packed, main auditorium at the Hyatt Regency. “Will hospitals monetize their assets? Why monetize? Why not monetize? How do you select the assets to monetize if you do monetize? And, how do you select a partner?”

Mr. Bodnar’s healthcare team at CBRE represented CHI and brokered the deal for the health system.

“The goal of the panel is to give the audience two perspectives, one from the health system side, Catholic Health Initiatives, and one from the investor side, Physicians Realty Trust,” Mr. Bodnar noted.

Taking part in the panel discussion were four of the key players: 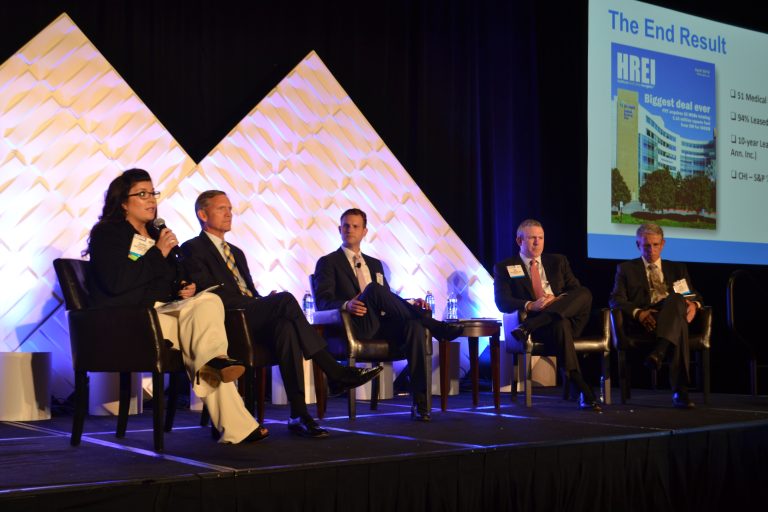 Some of the key players from last year’s blockbuster Catholic Health Initiatives (CHI) medical office building (MOB) portfolio monetization gathered recently to provide a behind-the-scenes look at what some have termed the “biggest deal ever.” They were, from left to right, Courtney Hanfland of CHI, John Thomas of Physicians Realty Trust (DocREIT), Chris Bodnar of CBRE, Nick Barto of CHI and Deeni Taylor of DocREIT.
(HREI™ photo)

Ms. Hanfland began by explaining that CHI has operations in 17 states with 104 hospitals, including four academic health centers, 30 critical access hospitals (CAHs), two community health service organizations, 22 long-term care facilities, home health and 12 clinically integrated networks. The first step, she said, was to decide whether the health system should sell a portfolio of buildings and, if so, the second step was to decide which buildings to sell.

“To translate that into real estate numbers … we have more than a thousand owned properties and we sold just more than 50,” she noted, “So that answers the common question that people ask, ‘Gosh, you sold all of your real estate?’ Not quite, as we have over 72 million square feet of real estate, or about 56 million when you take out land and parking garages. And we’ve got over 1,800 leases between income and expense.”

When Ms. Hanfland arrived at CHI in 2013 after working for nearly six years at Denver-based HRE developer NexCore Group LP, the health system worked with CBRE to develop a database of all of its properties, figuring out all of what it owned and what it leased from third-party landlords.

“Real estate is a necessity for health systems, as it is the box in which care is delivered,” she said. “But it is not necessarily viewed in context of: What is its value? Do we need to own it? Why do we need to own it? What do we not need to own? What are the types of burdens that come with owning certain types of real estate? So we really looked at quantitative considerations, but what we really looked at was qualitative considerations in terms of what do we own, why do we own it and what is it worth.”

One of the system’s quantitative considerations was